WE CAN NOW PROJECT UTAH FOR…CLINTON? 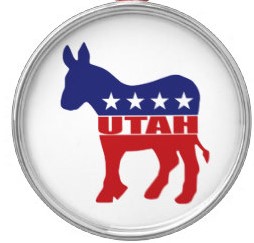 Can you imagine the networks on election night calling the state of Utah for Hillary Clinton?

The most counted on red state in America – home of Donny and Marie – actually going blue?

Then I looked a little deeper into a new Deseret News/KSL poll that found that if Donald Trump is the Republican Party nominee, Utahns would vote for a Democrat for president for the first time in more than 50 years.

“I believe Donald Trump could lose Utah. If you lose Utah as a Republican, there is no hope,” said former Utah Gov. Mike Leavitt, a top campaign adviser to the GOP’s 2012 nominee, Mitt Romney.

Of course, Romney has already announced he will not support Trump under any circumstance, which lead many to believe there will be a conservative alternative on the ballot.

Still, it must give establishment Republicans pause when Utah voters say they would reject Trump, as they recently did by an overwhelmingly majority in the GOP caucus.

The poll finds Clinton leading Trump 38 percent to 36 percent in a state dominated by conservative Mormons.

“Wow. Wow. That’s surprising,” said Chris Karpowitz, co-director of Brigham Young University’s Center for the Study of Elections and Democracy. “Any matchup in which Democrats are competitive in the state of Utah is shocking.”

Also surprising is the number of Utahns who said they wouldn’t vote if Trump were on the ballot. Sixteen percent said they’d skip the election if Trump and Clinton were their ballot choices.

Utah hasn’t voted for a Democratic candidate for president in a general election since then-President Lyndon Johnson was running against Arizona Sen. Barry Goldwater in 1964.

But Karpowitz said Republicans better be paying attention to Trump’s lack of support in a state long considered a GOP stronghold if they expect to reclaim the White House this year.

“I know it is early and these things can change,” Karpowitz said. “But the fact that a Donald Trump matchup with Clinton or Sanders is a competitive race is a canary in a coal mine for Republicans.”