Win One for the Gipper 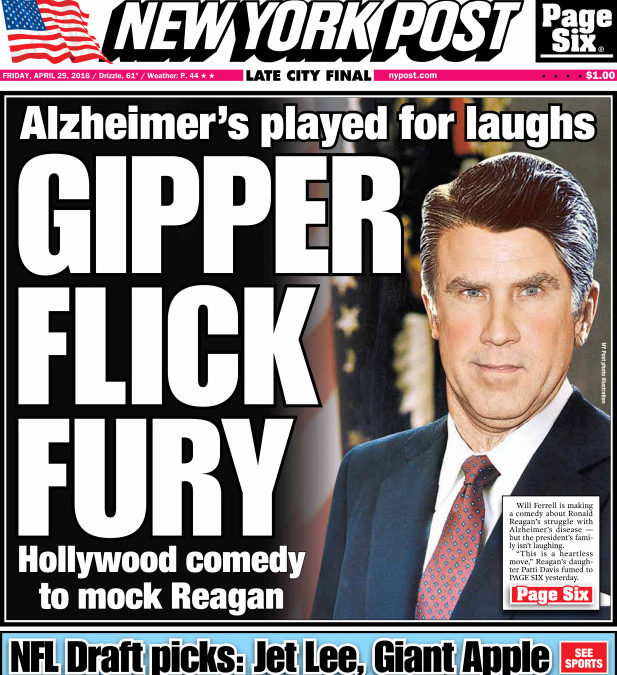 Just a day after it was announced Will Ferrell would be producing and acting in a comedy movie about Ronald Reagan and Alzheimer’s Disease, Ferrell announced he’s pulled out of the project.

Through a spokesman Ferrell said, “The Reagan script is one of a number of scripts that had been submitted to Will Ferrell which he had considered. While it is by no means a ‘Alzheimer’s comedy’ as has been suggested, Mr. Ferrell is not pursuing this project.”

Yesterday I shared my views about the idea under the headline: “Ferrell Traveling Down Distasteful Path.”

There had been unprecedented criticism online, led by Reagan’s daughter Patti Davis, about the movie.

Davis said Friday, “I am so relieved that Will has decided against this film. I can’t imagine that anybody else would sign onto it.”

Ferrell’s decision not to pursue the movie could have been a direct result of the onslaught of criticism from his fans and advocacy groups on social media.

Maybe after #WillFerrell films the comedy on Reagan’s Alzheimers he could do a comedy about kids’ bald heads after chemo. #NotFunny

When will Hollywood make a comedy about Ted Kennedy’s Chappaquiddick? #WillFerrell

Very sad that Will Ferrell apparently finds himself so hard up for work. Disrespectful and not at all funny.

There is nothing funny about Dementia and Alzheimer’s. That’s disgusting Will Ferrell. https://t.co/hYqCJJJSxp

#Alzheimers is not a comedy to the 5 million people who are suffering with the decease,it first robs you of your mind and then it kills you

While Ferrell is no longer associated with the project, the script for Reagan has already been written and performed in Los Angeles.