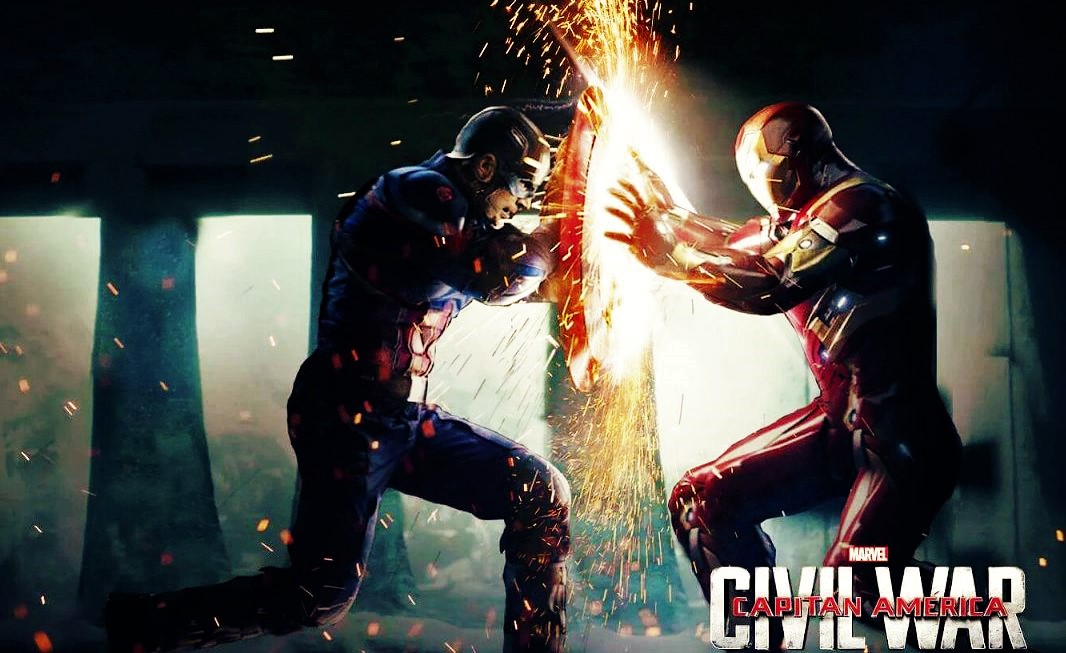 There are some major spoilers ahead. You have been warned.

Perhaps in this bitter election year it’s appropriate timing that our favorite superheroes are now battling over the age old issue of consent versus dissent.

The Avengers have had some massive battles the past few years protecting the earth. And while they have held back the bad guys, unfortunately, there have been innocent human casualties along the way.

Now the earth’s top politicians are upset and determined to do something about it.

As in pass a new law with strict regulations on where and when the Avengers can — and cannot — intervene in the worlds affairs.

Tony Stark, aka Iron Man, says it’s a fair request. Unchecked power is too dangerous he argues. And half the Avengers agree.

But Steve Rogers, aka Captain America, with memories of Hitler’s reich still fresh in his mind, tells the United Nations to take their proposed new Sokovia Accord and stick it.

And with that an epic Civil War begins splitting our beloved Avengers.

What I’ve always loved about how the Civil War story line is handled in the comics is the perfectly legitimate argument made by both sides.

After years of pondering it, I’ve sided with #TeamCap, mainly because the United Nations politicians cannot deliberate, and respond to the evils of the world, quickly enough to be taken seriously.

So that’s the back story, what about the movie?

Captain America: Civil War has been getting some awesome reviews:

“A decisively superior hero-vs.-hero extravaganza that also ranks as the most mature and substantive picture to have yet emerged from the Marvel Cinematic Universe.” – Variety

“Captain America: Civil War brings the fun, the fierce and the fireworks. Summer, we have liftoff.” -Rolling Stone

“It’s that rare superhero movie that doesn’t grind you down with nonstop action or, worse yet, the usual tiresome cavalcade of smart-ass wisecracks.” -TIME

So while these positive professional reviews come in, let me jump on the bandwagon: This is the best Captain America movie made thus far, and arguably one of the best Marvel movies ever made.

That’s some high praise right there.

I’m a bit biased. Cap America has always been my favorite Avenger. He’s grounded in just doing the right thing. And he’s loyal to a fault.

Sure, compared to the snarky Iron Man, or the outta control Hulk, or the beyond-the-universe Thor, Cap can sometimes appear dated. But he has a spine of iron and that consistency has appeal.

But even if Cap isn’t your favorite, this movie will be. The issues raised are timely (hello NSA) with Captain America and Iron Man beating the crap out of each other to drive home the point.

The big bonus in this movie is the appearance of a young Spider Man. Finally Sony and Marvel have put their differences aside and Spidey is allowed to appear in an Avengers movie. And he’s terrific.

The previous Sony Spider Man movies have been a bit of a disappointment to me. The subpar plots weren’t helped by the actors cast to play him. Tom Holland is, by far, the best onscreen Spider Man to date. His solo movies are going to be awesome.

Also making an appearance is Ant Man, still bewildered to be part of the Avengers, with welcome comic relief during the intense battle between the superheros.

Bucky, the Winter Soldier, begins to emerge as his own personality, but the plot twist of him having killed Tony’s parents is unexpectedly dark and further complicates the Civil War.

What is key in this movie, and all the Marvel films, is the writing and directing. Superior in every way to the recent Batman vs Superman,  DC Comic writers need to sneak into this movie, take notes, and steal everything they can before the Justice League is completed.

Marvel has this superhero franchise down to a science. And I can’t wait until the next chapter!