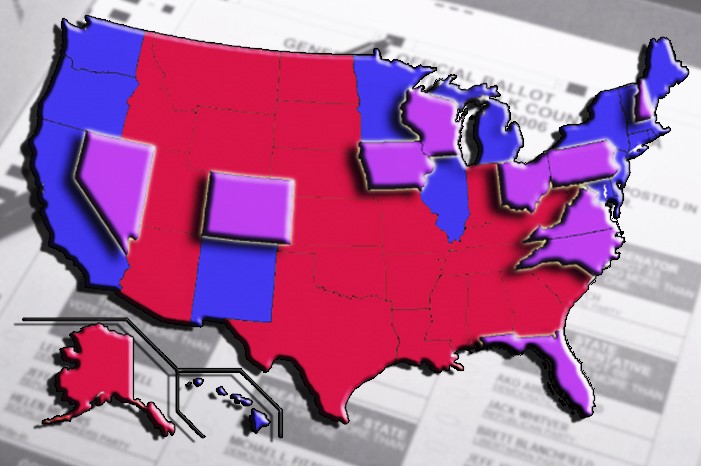 Do you wonder why after Labor Day every four years the presidential candidates, and the national media, seem to spend all their time in only a few states?

As I explained in my book Front Row Seat at the Circus:

Each election night, presidential candidates keep their eyes on just a handful of states. Most politicos right now could accurately predict which way forty states and their electoral votes will go in 2016. It’s sad there aren’t more competitive states, but it’s true. States like California, New York, Illinois, Hawaii, and Vermont are solidly blue. States like Texas, Tennessee, Alaska, Utah, and South Carolina are solidly red. In the small toss-up “purple” group, besides Ohio, obviously, Florida is a huge prize. The other competitive purple states—Virginia, Nevada, and Colorado—are not as big as Ohio.

National polls between now and November may provide us a snapshot of what Americans are generally thinking about the race, but let’s face it, we can project right now with almost certainty how 40 states will fall. If you’re in one of those states, sorry, but we already know how a majority of your neighbors will be voting. The only good news for you is that you’re unlikely to see campaign ads on TV every single commercial break.

Those Top Two states are:

Again, from my book:

No Republican presidential candidate in American history has ever reached 270 electoral votes and the White House without winning Ohio. Think about that for a second. That’s an amazing record dating back to 1856. Let me repeat it: No Republican has ever been elected president without winning Ohio. In fact, no Democrat has won the White House without Ohio since John F. Kennedy in 1960. And Ohio now has the longest streak of voting for the winning presidential candidate of any state in the country. Over the last four presidential elections combined, just 144,818 votes separate Republicans from Democrats out of about twenty-two million votes cast. That’s a difference of less than 1 percent. That’s why come fall in the race for the White House, the news usually centers around, as Tim Russert said, “Ohio, Ohio, Ohio.”

JFK is the last person to lose Ohio and still win the presidency, and he never really got over it. “There is no city in the United States where I get a warmer welcome and less votes than Columbus, Ohio,” JFK told an audience to laughter and applause in 1962. That was a long time ago. Only about a third of America’s current population was alive when Kennedy moved into the White House. Thus why all modern presidential candidates have spent more time in Ohio than any other state. It’s foolish to think you’re going to be president without it.

Who could ever forget Election Night 2000 and the national chaos created by Florida’s voters?  The networks first declared Al Gore the winner of Florida, and if that had been accurate, he would have been the 43rd President of the United States. Alas, after weeks of counting and recounting, the Supreme Court finally said George W. Bush had won the state. Since then Florida has been actively contested by both parties. Like Ohio, Florida went for Barack Obama in both 2008 and 2012.

NOTE: Florida and Ohio are especially important to Donald Trump in 2016 because if he loses either one he’s unlikely to reach the 270 electoral votes he needs. Hillary Clinton has a little bit more wiggle room on the map, but not much.

Other battleground states to watch this fall:

From 1976 to 2004, Virginia was a put-it-in-the-bank for Republicans state. Democrats finally had a breakthrough in Virginia in 2008 and 2012. Many in the media (based in Washington, DC) will suggest this state has long been a battleground, but that is not the case. It’s 13 electoral votes, however, will be a coveted prize for both sides in 2016.

Like Virginia, this state has gone from a once dependable Republican state to Democratic-leaning during the Obama era. You can bet there will be plenty of political ads during Broncos games this fall.

Typically a Republican-leaning state, if Donald Trump gets into big trouble here it’s an indication that a landslide defeat is probable.

A little bitty state but in a close election 4 electoral votes could be like gold.

Typically a Democratic-leaning state, if Hillary Clinton gets into trouble here it’s likely an indication that she’s lost the Midwest and will need the southern battleground states to win.

Nevada will be in play and, at least on paper, both campaigns could argue why they will have the upper hand here.

Wisconsin is a blue state in presidential elections and should be again in 2016. That said, if Trump truly has blue collar support it would show up in states like this. If Clinton is in trouble here, we will have some new dynamics in play that could shake up the electoral map.

This farmland state tilts Democratic in presidential elections but in 2016 is rural America ready for its first woman president? Clinton is trying to break one of the last remaining glass ceilings in American politics. Until it’s done, it hasn’t been done. Let’s watch the heartland closely to see if Clinton has more than Trump to worry about.

Based on his crowds during the primary campaign Arizona should be Trump Country in 2016. But if his Hispanic support remains at a historic low (currently 11-20 percent) Democrats could decide to play ball here. The last time Arizona voted for a Democrat was Bill Clinton in 1996. If Trump begins to sink here, he is likely to take incumbent Senator John McCain down with him.