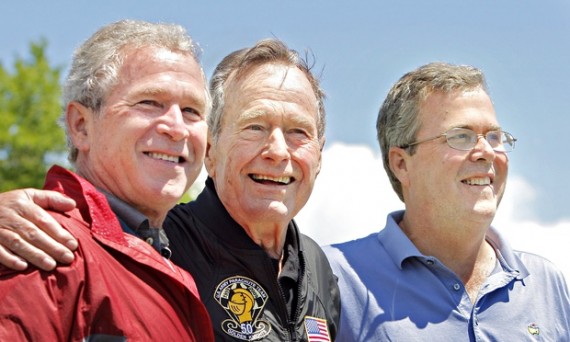 His father George Bush was president of the United States. So was his older brother George W. Bush. But for former Florida governor Jeb Bush, his presidential dreams died this year after Donald Trump trivialized him into a low energy loser.

Now, as Republicans gather in Cleveland to nominate the billionaire reality TV show host, Bush is already dreaming about a post-Trump GOP.

“It is clear that this election will have far-reaching consequences for both the Republican Party and our exceptional country,” wrote Bush in an op-ed in the Washington Post. “I do not believe Donald Trump reflects the principles or inclusive legacy of the Republican Party. And I sincerely hope he doesn’t represent its future.”

It is a stunning rebuke of his party’s nominee after so many decades of Bush family involvement in the GOP. At one point, George Bush even served as Chairman of the Republican National Committee.

“Trump’s abrasive, Know Nothing-like nativist rhetoric has blocked out sober discourse about how to tackle America’s big challenges,” wrote Bush. “This year has taught us the risks of letting personalities run roughshod over substance and principle. Let’s reintroduce civility, ideas and optimism back into politics.”

Trump has spent years at war with the Bush family. It started in 1988 when he offered himself as a running mate for then Vice President George Bush. According to his diary, Bush thought the overture from the young New York developer “strange and unbelievable.”

Years later Trump recommended the impeachment of George W. for taking the country to war in Iraq. Like Barack Obama and other liberals, Trump had opposed the decision to go after Iraqi dictator Saddam Hussein. Earlier this year, he argued that W. had been responsible for the terrorist attacks on 9/11.

Last week during a speech in Dallas, the former president took his own indirect shot at Trump who has proposed building a wall on the Mexican border and banning Muslims from entering the country.

“We have never been held together by blood or background,” said Bush. “We are bound by things of the spirit, by shared commitments to common ideals. At our best, we practice empathy, imagining ourselves in the lives and circumstances of others. This is the bridge across our nation’s deepest divisions.”

In retirement, former first lady Barbara Bush couldn’t remain quiet about the election, saying, “I don’t know how women can vote for Trump.”

“I want our next president — whoever he or she might be — to be somebody who is interested in women in Afghanistan and who will continue U.S. policies,” said Bush during a Women in the World summit in April. “We need someone who will pay attention to our history, and know what’s happened before and know specifically how we can continue to do the good things that we do around the world.”

Clinton visited Afghanistan four times during her tenure as Secretary of State and is more closely aligned to the Bush foreign policy than Trump.

As for the next generation, Texas Land Commissioner George P. Bush, son of Jeb and Chairman of the Texas GOP Victory Fund, is not backing Trump either.

“I, along with others, are not in a position to endorse at this time because of concerns about Trump’s rhetoric and his inability to create a campaign that brings people together,” said Bush, 40, who is a rising star in Texas politics. “It is incumbent upon him to be serious and to get his tonality right.”

“When the party begins to rebuild after Trump, Marco Rubio and George P. Bush will be two people that they look at as a blueprint for potential good times ahead,” said Joe Brettell, a former GOP congressional staffer. “George P. is absolutely on any smart Republican’s radar.”