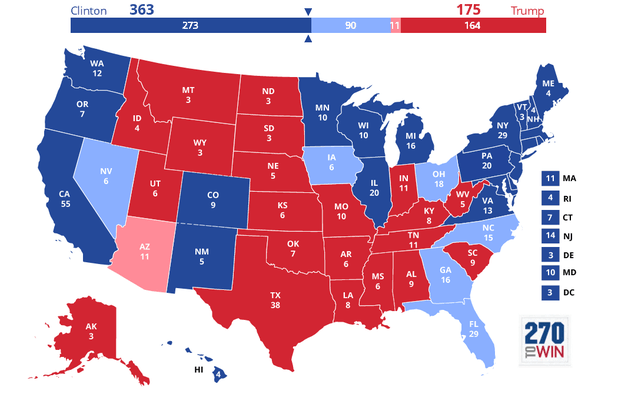 In 90 days Americans will head to the polls and we will learn whether Hillary Clinton or Donald Trump will become the 45th president of the United States.

The presidential race isn’t about popular votes. It’s about electoral votes. First one to 270 wins. And in the last 10 days since our first Electoral Vote prediction, Clinton has slightly expanded her already big lead.

Here are the states that, as of today, we’ve called for Clinton (states in blue) and for Trump (states in red).

Clinton leads with 363 electoral votes to Trump’s 175. Note that Clinton now leads in all ten battleground states, including Florida and Ohio. She has also developed solid leads in Virginia, Pennsylvania, Michigan and Colorado. Clinton has gained 16 electoral votes in the last ten days due to Georgia going from slightly red to slightly blue.

Our first prediction ten days ago had Clinton with 347 electoral votes and Trump with 191. What does Trump have to do in the next couple months to flip this election around?

He needs to take the lead in Florida, Ohio, North Carolina, Wisconsin, Nevada, Iowa and New Hampshire. Those states will give him 279 electoral votes and the win. The Clinton campaign has pulled its TV advertising in Virginia and Colorado where their lead is strong. Pennsylvania, despite being a Trump target, remains stubborn for Republicans. Clinton now has a ten point lead there in recent polls.