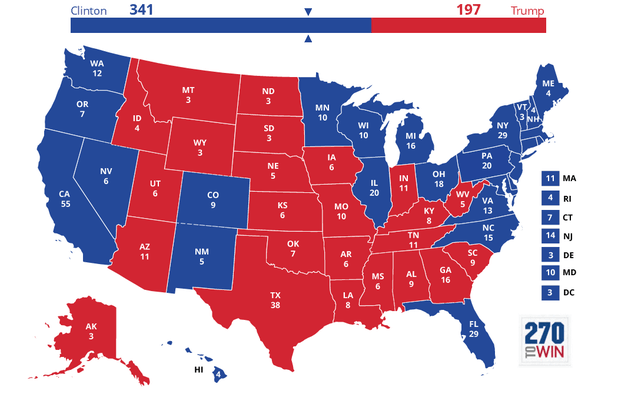 With two months to go until the election, Hillary Clinton maintains a healthy lead in the electoral college. But there are reasons why both campaigns are working overtime in key states as the polling tightens. The good news for Clinton is that her lead is holding in the biggest battleground states.

But polling in the last ten days shows some better news for Donald Trump.

First, we have flipped the state of Iowa from Clinton (blue) to Trump (red). Trump now leads in this traditionally white, rural state by combined poll averages of less than one percent. Iowa remains up for grabs, but Trump is playing well there.

Next, the most positive development for Trump is that Clinton’s firm electoral vote count — those states where she is polling a combined 8 points higher than Trump – has dropped for the first time below 270. What happened? Over the last ten days Clinton’s lead in Pennsylvania, Virginia, Michigan and Wisconsin slipped below an average of eight percent. Those 59 electoral votes, which ten days ago were “firm” for Clinton are no longer considered a lock. When you combine the “firm” and “likely” states together, however, she jumps over the 270 mark.

Trump is having his own difficulty is some unexpected places. Over the past ten days he has watched his lead narrow in Arizona and Georgia, both states he must win. We have also downgraded Texas from “firm” to “likely” after his lead dropped below eight percent, and two major conservative newspapers endorsed Clinton.

The three states posing the biggest problem for Clinton at this point are Florida, North Carolina and Nevada. North Carolina is a state Mitt Romney won in 2012, and Nevada only has four electoral votes. It is becoming clear that, like 2000, Florida is the most important state this election cycle with its massive 29 electoral votes at stake.

Along that line, for Trump to win this election he must carry all of the states currently leaning his way, plus flip Florida, Ohio, North Carolina and Virginia. TRUMP 272 ELECTORAL VOTES (with the four additional states above)

Trump continues to lag behind Clinton in the traditionally Republican state of North Carolina. He must win there to have any chance of hitting 270.

He is closing the huge gap in Virginia where Clinton once enjoyed a double digit lead. He is playing better in Ohio where, despite the lack of support from Governor John Kasich, he is making progress with working class white voters.

As mentioned, Florida is the key. If Clinton wins there, she probably takes away all reasonable paths for Trump to reach 270. Look for Hurricane Bloodbath to continue on the airwaves all across the Sunshine State.