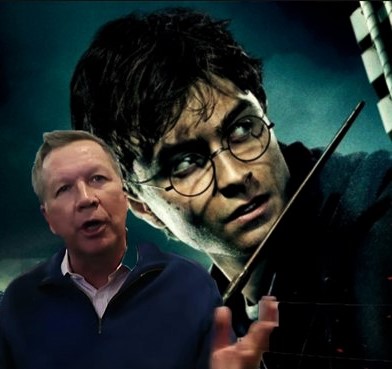 Ohio Governor John Kasich thinks actor Daniel Radcliffe would be less odd and more successful if he had some God in his life.

“You know that Daniel Radcliffe has declared himself an atheist? I’m serious,” said Kasich while campaigning for a Republican gubernatorial hopeful in New Hampshire. “What a weird thing. Why would a guy who has had all that success just, I mean, what the hell is wrong with him?”

What is wrong with him?

Radcliffe, who starred in eight Harry Potter films, is a supporter of the worlds best known atheist Richard Dawkins. But his activism in Britain has centered around gay teen suicide prevention, not atheism. Leading to the question of why his religious views bother Kasich so much that he felt compelled to bring it up at a campaign event?

Truth be told, Kasich may portray himself as a moderate but as I wrote in Front Row Seat at the Circus, when it comes to social issues, Kasich is proudly on the far-right.

“A declared atheist, I don’t even know why he would say that,” continued Kasich to a small group that seemed shocked he was ranting about it. “He’s an odd guy, isn’t he? He’s not really taken off has he? I don’t think so.”

An odd guy? Besides being Harry Potter for a generation of movie fans, the 27 year old Radcliffe will soon be teamed with Zachary Quinto in the upcoming drama “We Do Not Forget.”

Whether God had anything to do with Radcliffe landing that movie role, or Kasich not being president, we cannot say.