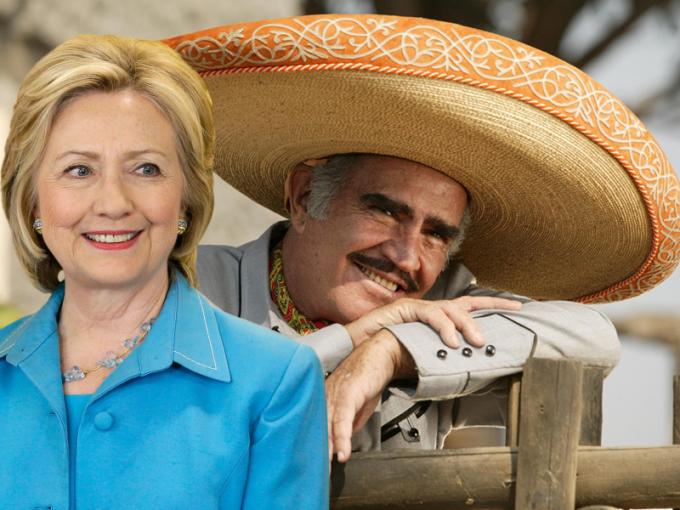 Revered by both young and old, the greatest living singer of Mexico, Vicente Fernández, has unretired to endorse Hillary Clinton for president.

“Dear brothers, your voice is your vote,” says Fernández, 76, in a video before breaking into song: “I am Latino to the bone, and very proud of it… And I remind you, brother, that we have to go hand in hand until Hillary Clinton has victory assured.”

The 76 year old iconic ranchera singer had retired earlier this year after more than five decades of performing.

“El Corrido de Hillary Clinton” features Fernández in a charro suit and sombrero urging people to vote, touting the attributes of “La Hillary” during a montage of campaign photos of the Democratic candidate with Hispanics.

On the scale of celebrity endorsements within the fast growing Hispanic voting population, Vicente Fernández is a big catch.

This is the first time the iconic mustachioed macho man known for his cantina-style songs has directly backed a U.S. presidential candidate with a custom corrido.

But it isn’t the first time he’s been politically involved. Perhaps as a sign of how far Republicans have dropped within the Hispanic community, Fernandez performed at the 2000 Republican National Convention, a guest of then Texas Gov. George W. Bush.

The endorsement could be important in states like Arizona and Colorado where Hispanics have been lukewarm to Clinton compared to the level of support for Barack Obama four years ago.