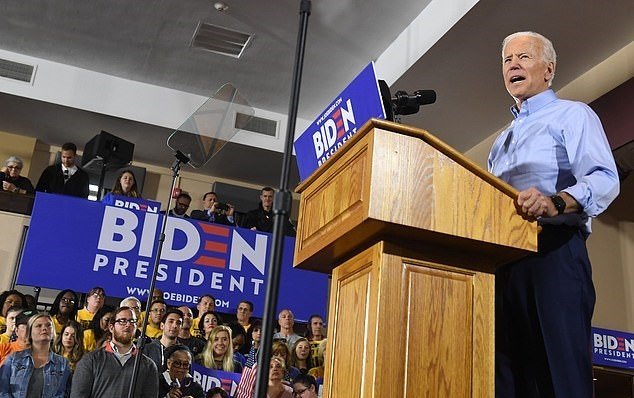 Former Vice President Joe Biden launched his first campaign rally today to the crowd of blue-collar voters who he believes can put him in the White House as they did for President Donald Trump in 2016.

Let there be no doubt that for Biden, removing Trump from the presidency should be Democrats top priority.

‘We have to choose hope over fear, unity over division, and maybe most importantly, truth over lies,’ he said in one of the biggest applause lines of his remarks.

‘Donald Trump is the only president who’s decided not to represent the whole country. The president has his base. We need a president that works for all Americans,’ Biden argued.

He told the crowd of mostly white, male voters he needed them to win in 2020.

‘We love Joe, We love Joe,’ the union-heavily crowd at the Teamsters Local 249 banquet hall shouted.

‘By the way, I make no apologies. I am a union man,’ Biden said to heavy applause.

Biden made his opening pitch in a packed union hall in a revitalized area of Pittsburgh, standing in front of a sign that read ‘Biden works for America.’

Surrounded by union workers in yellow ‘fire fighters for Biden’ t-shirts and waving blue ‘Biden for president’ signs, he talked to crowd in his ‘regular Joe’ image, pressing how he was one of them.

He told stories of how he was called ‘middle class’ in a way that was not a compliment and described the worries his family had, comparing how they were similar to theirs.

He spoke of his late son Beau’s battle with brain cancer.

‘I could not imagine what it’d be like we were told that he’s run out of money in the insurance policy, and we’re going to have to cut them off with the palliative care he was getting,’ he said.

And he rallied the crowd with fighting words.

‘Workers feel powerless and too often humiliated. I call it an abuse of power. And I can’t stand it. Never have been able to. And when I think about work, I think about dignity. I think about a lot about my dad, a proud gentlemen. My dad had an expression. He said, Joey, a job is about a lot more than a paycheck. It’s about your dignity,’ he said.

Sleepy Joe Biden is having his first rally in the Great State of Pennsylvania. He obviously doesn’t know that Pennsylvania is having one of the best economic years in its history, with lowest unemployment EVER, a now thriving Steel Industry (that was dead) & great future!……..

The Dues Sucking firefighters leadership will always support Democrats, even though the membership wants me. Some things never change!

The president also claimed he’s in office because of Biden and former President Barack Obama.

Biden’s first stop is on friendly-territory: a native of Scranton he’s long identified with the people of Pennsylvania and with the blue-collar voters of the Rust Belt who are the back bones of unions.

His next stops are in Iowa, where he’ll spend two days campaigning in the early caucus state. In 2008, he garnered a mere 1 percent in the Iowa caucuses, a showing that dashed his presidential dreams that year.

Biden started his first official campaign event strong, with an endorsement from the International Association of Firefighter (IAFF), a powerful union who sat out the 2016 presidential race.

The former vice president talked about the support he had from a variety of unions throughout the years and told the crowd he supported their right to work.

‘The dignity of work is my measure. Which is about being about to provide for your family,’ he told the crowd.