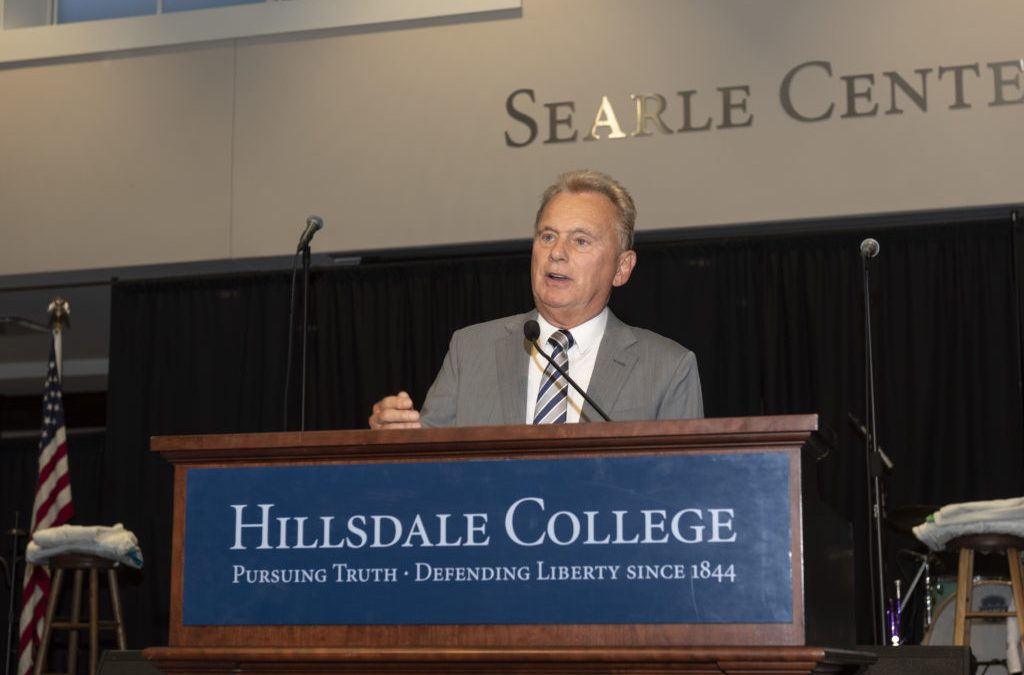 Longtime Wheel of Fortune host Pat Sajak will soon be Chairman of the Board of Trustees at Hillsdale, a conservative private college of 1,400 students in southern Michigan.

Sajak has served on the board for a dozen years, and the new post won’t interfere with his television work.

The school, which takes no federal funds, benefits financially from public ties to Trumpism: It advertises on Fox News and in Trump supporters’ inboxes.

Its alumni fill prominent roles in the administration, from speechwriters to the chief of staff for Betsy DeVos.

Hillsdale describes itself as “nonsectarian Christian” and rents email lists from the Trump campaign through a third party firm.

It is no coincidence that Justice Clarence Thomas, an advocate of strict “originalist” interpretation of the Constitution, delivered the commencement address last spring, likening Hillsdale to a “shining city on a hill” for its devotion to “liberty as an antecedent of government, not a benefit from government.”

Sajak said he would like to see Hillsdale’s national reach continue to expand.

“Our funding comes from people who have never stepped foot on campus,” he told the school newspaper. “And that’s the challenge: the outreach.”

The most popular of Hillsdale’s free online courses, Constitution 101 — 10 weeks of lectures by faculty members, with recommended readings — has been taken by more than 800,000, according to the college, and has offered intellectual ballast to Tea Party activists.

“By educating millions of Americans on our founding principles of liberty,” the college writes of its goals, “America can begin to turn around and restore lost liberty.”

Students on campus like to form clubs, on everything from politics to cigar smoking to highland dancing.

One that does not exist at Hillsdale College is an L.G.B.T.Q. organization.

Openly gay or lesbian students are a rarity, and The Princeton Review consistently ranks Hillsdale among the 20 least L.G.B.T.Q.-friendly campuses.

A public furor erupted in 2015 when the chaplain sent out a campuswide email calling for prayer against the “evil” and “ugly” possibility that the Supreme Court would legalize same-sex marriage.

College leaders admonished him for his tenor, though not the message: “The tone and language of the email did not properly represent our commitment to thoughtful inquiry and civil discussion,” the provost, David M. Whalen, said in a statement.

In Washington, Hillsdale plays an active role in an ecosystem of conservative thought and policy.

It joined with the Heritage Foundation to run a fellowship program for congressional staff members.

Its D.C. outpost, the Allan P. Kirby Jr. Center for Constitutional Studies and Citizenship, runs a lecture series and serves as a base for Hillsdale undergraduates who are interning at conservative think tanks or publications.

Aiming to nurture its vision of classical education, the college has also helped establish K-12 charter schools across the country.

Sajak has donated thousands of dollars to Republican candidates through the years, according to public financial records.

In 2014 he tweeted: “I now believe global warming alarmists are unpatriotic racists knowingly misleading for their own ends. Good night.”

He later said he was joking, although he has regularly attacked liberal causes and candidates.