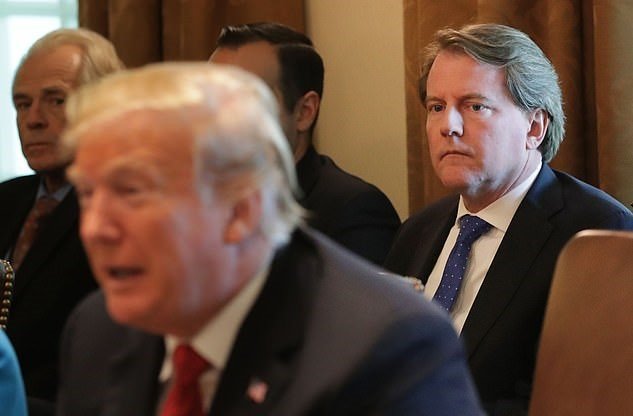 McGahn refused to “do crazy shit” by trying to get Mueller fired.

McGahn fell afoul of the president after Trump called him at home on a Saturday in June 2017 instructing him to tell acting attorney general Rod Rosenstein that Mueller— who had only been appointed a month earlier — had a conflict of interest and had to be fired.

McGahn considered the President’s request to be an inflection point and he wanted to hit the brakes, Mueller wrote.

‘When the President called McGahn a second time to follow up on the order to call the Department of Justice, McGahn recalled that the President was more direct, saying something like, “Call Rod, tell Rod that Mueller has conflicts and can’t be the Special Counsel.”’

McGahn decided he should quit because he ‘felt trapped’ by Trump’s demands.

He then called his lawyer and told his chief of staff Annie Donaldson that he would resign before driving to his office to pack his belongings and submit his resignation letter.

‘McGahn told Donaldson that the President had called at least twice and in one of the calls asked “have you done it?”

Mueller said McGahn did not tell Donaldson what it was that Trump wanted him to do because he was consciously trying not to involve her in the investigation.

Later that evening McGahn called then-White House chief of staff Reince Priebus and Trump strategist Steve Bannon to tell them of his decision.

‘Priebus recalled that McGahn said that Trump had asked him to “do crazy shit,” but he thought McGahn did not tell him the specifics of the President’ s request because McGahn was trying to protect Priebus from what he did not need to know.

Both Priebus and Bannon urged him not to resign and, in the end, he decided to stay on.

‘McGahn did not carry out the direction, however, deciding that he would resign rather than trigger what he regarded as a potential Saturday Night Massacre,’ referring to the slew of resignations that occurred after President Nixon tried to fire special counsel Archibald Cox in 1973,’ wrote Mueller.

In early 2018 McGahn’s threats to quit leaked out.

Trump told White House officials to tell him to deny them, but McGahn told them the reports were accurate,’ Mueller wrote.

‘The President then met with McGahn in the Oval Office and again pressured him to deny the reports.

McGahn, 50, stayed in office another 16 months before quitting in October last year.

Two days after Trump’s meeting with McGahn, Mueller reports, the president met his former campaign chief Corey Lewandowski and dictated a message that he ordered him to take to Sessions, who he had already attacked for recusing himself from overseeing Mueller’s probe.

‘The message said that Sessions should publicly announce that, notwithstanding his recusal from the Russia investigation, the investigation was “very unfair” to the President, the President had done nothing wrong, and Sessions planned to meet with the Special Counsel and “let [him] move forward with investigating election meddling for future elections.”’

Lewandowski said it was clear what Trump really wanted Sessions to do, but he stalled and did not pass the message on to Sessions, who Trump fired immediately after last year’s mid-term elections.

It took another month before Trump and Lewandowski met again, and the president asked what had happened.

Lewandowski said ‘the message would be delivered soon.’

‘Dearborn was uncomfortable with the task and did not follow through,’ Mueller’s report recounts.

Sessions had already disobeyed Trump’s order to insert himself into the Mueller probe.

On the first weekend in March 2017 ‘the President took Sessions aside at an event and urged him to “unrecuse.”’ Mueller wrote.

Trump told her to draft an internal letter saying he had directed Flynn — who had resigned a day earlier — not to discuss sanctions against Russia with that country’s ambassador Sergey Kislyak.

McFarland declined because she did not know whether that was true, Mueller writes.

And an unnamed White House lawyer also agreed that McFarland should not write the memo because it ‘would look like a quid pro quo,’ for being nominated as ambassador to Singapore.

McFarland. 67, lasted another three months in office before being fired by Flynn’s successor, H.R. McMaster.