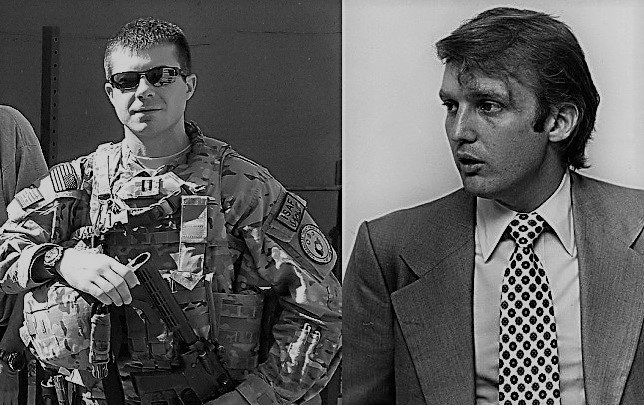 Trump never served in uniform, earning five deferments from the draft – including a medical exemption, for ‘bone spurs.’

Asked whether Trump should have followed 2.7 million other Americans into active duty, Buttigieg didn’t skip a beat.

“I have a pretty dim view of his decision to use his privileged status to fake a disability in order to avoid serving in Vietnam,” he said.

Later Buttigieg made a comparison between himself and the real estate tycoon with a lengthy TV pedigree.

“I don’t have a problem standing up to somebody who was working on Season Seven of ‘Celebrity Apprentice’ when I was packing my bags for Afghanistan,” he said.

Trump told radio shock-jock Howard Stern in 1997 that surviving the sex-fueled 1980s in Manhattan was his ‘personal Vietnam.’

He said bed-hopping with models made him feel like a ‘great and very brave soldier,’ and that he was ‘lucky’ to escape without a venereal disease.

Buttigieg, a 37-year-old veteran, is the Democratic mayor of South Bend, Indiana.

He would be the youngest president in U.S. history.

He would also be the first openly gay Commander in Chief.

He served as a reserve Navy intelligence officer and was deployed to Afghanistan for seven months in 2014.

Asked if he thought Trump actually faked a disability, he shot back: ‘Do you believe he has a disability?’

‘That’s exactly what he did,’ Buttigieg declared, saying the president had engaged in ‘manipulating the ability to get a diagnosis.’

‘If you were a conscientious objector, I’d admire that,’ he said.

‘But this is somebody who, I think it’s fairly obvious to most of us, took advantage of the fact that he was the child of a multimillionaire in order to pretend to be disabled so that somebody could go to war in his place.’

Trump famously received five separate draft deferments during the 1960s and 70s, including one for a medical condition – a bone spur in his heel – that the diagnosing doctor’s children said last year was a ‘favor’ for Trump’s late father.

As candidate Trump navigated the instant firestorm of his early verbal slams at Sen. John McCain, dismissing his iconic war-hero status because ‘he was captured,’ he was asked to explain why he never served in uniform.

After an unperturbed Trump told reporters that day about his bone spur, he waved off a question about which foot had been the problem, saying someone would ‘have to check the records.’

Stern said that, in private, he and Trump had previously compared every woman’s vagina to a ‘potential land mine.’

‘There is some real danger there,’ Trump joked during the broadcast.

Ultimately he conceded to New Hampshire voters in 2015 that he felt ‘a little guilty’ for not serving in Vietnam.

McCain said months before he died that he didn’t fault Trump for finding a way to avoid the draft, but criticized the loopholes that gave sons of the wealthy a way out.

He had said in a 2017 C-SPAN interview that the U.S. military ‘drafted the lowest-income level of America, and the highest-income level found a doctor that would say they had a bone spur.’

Later on ‘The View,’ he put the obvious jab at the president in perspective.

‘I don’t consider him so much a draft dodger as I feel that the system was so wrong, that certain Americans could evade their responsibilities to serve the country,’ McCain said.