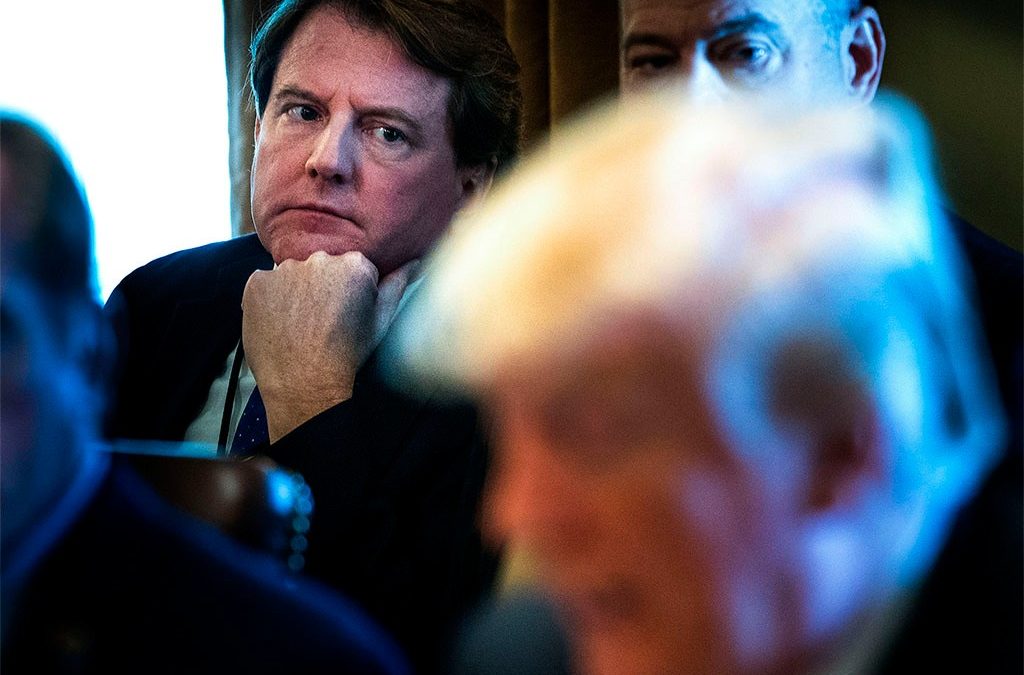 White House officials asked at least twice in the past month for the key witness against President Trump in the Mueller report, Don McGahn, to say publicly that he never believed the president obstructed justice.

His reluctance angered the president, who believed that McGahn showed disloyalty by telling investigators for the special counsel, Robert Mueller, about Trump’s attempts to maintain control over the Russia investigation.

The White House made one of the requests to McGahn’s lawyer, William Burck, before the Mueller report was released publicly but after the Justice Department gave a copy to Trump’s lawyers in the preceding days.

Reading the report, the president’s lawyers saw that Mueller left out that McGahn had told investigators that he believed the president never obstructed justice.

Burck had told them months earlier about his client’s belief on the matter and that he had shared it with investigators.

“We did not perceive it as any kind of threat or something sinister,” Burck said in a statement. “It was a request, professionally and cordially made.” A White House spokeswoman did not respond to a message seeking comment.

But after the report was released, detailing the range of actions Trump took to try to impede the inquiry, McGahn decided to pass on putting out a statement supportive of the president.

The report also revealed that Trump told aides he believed McGahn had leaked to the news media to make himself look good.

The episodes show the lengths the White House has gone around the release of the Mueller report to push back on the notion that Trump obstructed justice.

House Democrats have used the report to open investigations into whether Trump abused his position to insulate himself from the Russia inquiry.

The revelations came as the Democrats on Friday increased their pressure on the White House on other fronts.

The chairman of the House Ways and Means Committee, Richard Neal, subpoenaed the Treasury Department and Internal Revenue Service for six years of Trump’s personal and business tax returns.

Democrats are also pursuing testimony from Mueller but have not agreed on a date, Representative Jerrold Nadler of New York, the chairman of the House Judiciary Committee, told reporters.

In the days after the report was released, White House officials asked McGahn again to put out a statement as Trump fumed about his disclosures but McGahn rebuffed the second request as well.

White House officials believed that McGahn publicly asserting his belief would calm the president and help the administration push back on the episodes that Mueller detailed in the obstruction section of the report.

Around the time McGahn declined the second request, the president’s lawyer Rudy Giuliani began publicly attacking his credibility, saying that McGahn had a bad memory.

The White House learned in August that McGahn had told Mueller’s investigators that he believed the president had not obstructed justice, according to one of the people.

After a New York Times article revealed that McGahn had spoken to investigators for at least 30 hours, Burck tried to reassure the White House by explaining that his client told Mueller that he never believed Trump had committed an obstruction offense.

McGahn’s cooperation with Mueller played a crucial role in allowing the special counsel’s investigators to paint a picture in their report of a president determined to use his power atop the executive branch to protect himself from the Russia investigation.

The president’s lawyers are particularly concerned about two episodes that McGahn detailed to prosecutors.

In one, Trump asked him to fire the special counsel but backed off after McGahn refused.

After that episode was revealed, the president asked McGahn to create a White House document falsely rebutting his account.

McGahn declined to go along but told Mueller about the encounters.

That is a determination made by prosecutors, not witnesses.

But politically, such a statement could have been a powerful argument for Trump, who faces scrutiny from House Democrats about whether he obstructed justice and abused his power.