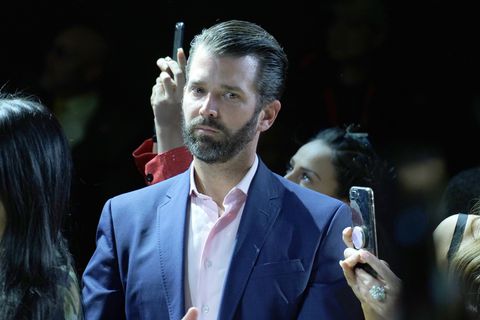 The Republican-led Senate Intelligence Committee has subpoenaed Donald Trump Jr. to answer questions about his previous testimony before Senate investigators in relation to the Russia investigation.

It’s the first congressional subpoena — that we know about — of one of President Trump’s children.

The subpoena sets up a fight that’s unprecedented in the Trump era: A Republican committee chair pit against the Republican president’s eldest son.

It’s also a sign that the Russia investigations in Congress aren’t over despite the conclusion of special counsel Robert Mueller’s probe and despite Senate Majority Leader Mitch McConnell saying it’s time to move on from the Russia probe.

“Don and Senate Intel agreed from the very beginning that he would appear once to testify before the committee and would remain for as long as it took to answer all of their questions. He did that. We’re not sure why we’re fighting with Republicans,” a source close to Trump Jr. told Axios.

Mueller, whose investigation did not find a conspiracy between the Trump campaign and Russia, did not indict Trump Jr., despite speculation that he would.

Trump Jr. once told an audience that Russia had significant influence in Trump finances.

“In terms of high-end product influx into the US, Russians make up a pretty disproportionate cross-section of a lot of our assets,” Trump Jr. told the audience in 2008.

Unlike many congressional investigations in the Trump era, the Senate Intelligence probe — led by Republican chairman Richard Burr and Democratic vice chair Mark Warner — has been largely bipartisan.

The fact that they’re subpoenaing Trump Jr. is a strong signal that he declined a request to appear before the committee again.

Trump Jr. testified before the Senate Judiciary Committee in September 2017 that he was only “peripherally aware” of proposed plans for the Moscow project.

In an interview with Fox News in January 2019, Trump Jr. downplayed his knowledge of the discussions about a possible Trump Tower in Moscow, saying that the project was a creation of President Trump’s former attorney Michael Cohen: “We don’t know anything about it. Ultimately, it was Michael Cohen essentially trying to get a deal done.”

Cohen claimed in his testimony before the House Oversight Committee in February that Trump Jr. was more aware of the project than that.

During the 2016 presidential campaign, Cohen testified, he briefed Trump Jr. and Ivanka Trump about the proposed Trump Tower Moscow project about 10 times.

The project was formalized in a letter of intent signed by Trump in October 2015, and the Wall Street Journal reported that the Trump Organization talked about the project with a Russian developer, and there were architectural plans and drawings showing what the tower would have looked like.