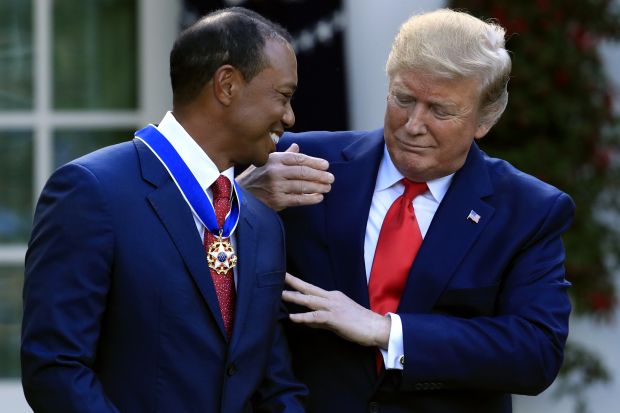 President Trump presented Tiger Woods with the Presidential Medal of Freedom today, less than a month after the golf star won his first major championship in more than a decade.

Woods visited the White House with his children, mother and wife to receive the honor.

Trump described the 43-year-old as “one of the greatest athletes in the history of sports.”

“He fought all the way back to the summit of golf,” Trump said. “Tiger, we are inspired by everything you’ve become.”

.@TigerWoods becomes the fourth golfer in history to receive the Presidential Medal of Freedom. pic.twitter.com/NoQCXKphCX

Three other professional golfers have received the Presidential Medal of Freedom, including Jack Nicklaus, Arnold Palmer and Charles Gifford.

Woods referenced the lull he had in his career during today’s ceremony.

Before his April 14 Masters win, his last major championship success was the U.S. Open in 2008.

“I’ve tried to hang in there, and I’ve tried to come back and Play the great game of golf again. I’ve been lucky enough to have had the opportunity to do it again,” Woods said.

“I’ve found a game that’s allowed me to do it. The amazing Masters experience I just had a few weeks ago is probably the highlight of what I’ve accomplished so far in my life on the golf course.”

Last month, Trump announced that Woods would be receiving the medal, one of the highest civilian honors, after Woods won the Masters, his fifth such title of his career.

Trump tweeted the next day:

Spoke to @TigerWoods to congratulate him on the great victory he had in yesterday’s @TheMasters, & to inform him that because of his incredible Success & Comeback in Sports (Golf) and, more importantly, LIFE, I will be presenting him with the PRESIDENTIAL MEDAL OF FREEDOM!

Woods and Trump are longtime business and golf partners, and Woods lives not far from Trump’s Mar-a-Lago Club in Palm Beach, Fla.

The two have teed off together several times, including at Christmastime in 2016 and around Thanksgiving in 2017.

The Trump Organization notes on its website that Nicklaus, who endorsed Trump for president, and Woods have both designed courses for the company.

According to the website, a new Trump World Golf Club that is “coming soon” to Dubai is being designed by Woods.

“We’ve played golf together. We’ve had dinner together. I’ve known him pre-presidency and obviously during his presidency,” Woods said last summer at the Northern Trust Open in New Jersey. Asked how he felt about Trump’s immigration policy, he diplomatically drew a line between the office and its occupant. “He’s the president of the United States. You have to respect the office,” he said. “No matter who is in the office, you may like, dislike personality or the politics, but we all must respect the office.”

That discretion earned praise from Trump, with the president tweeting: “The Fake News Media worked hard to get Tiger Woods to say something that he didn’t want to say. Tiger wouldn’t play the game — he is very smart. More importantly, he is playing great golf again!”

Woods is readying for the second major of the season, next week’s PGA Championship.

At 43, and coming off a number of surgeries on his knee and back, Woods is carefully managing the number of tournaments he enters and has kept a low profile since winning the Masters on April 14.