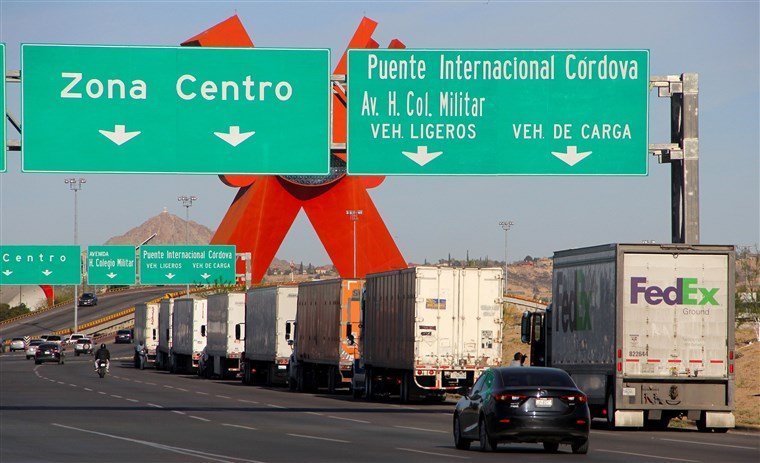 The deal to avert tariffs that President Trump announced with great fanfare on Friday night consists largely of actions that Mexico had already promised to take in prior discussions with the United States over the past several months.

Friday’s joint declaration says Mexico agreed to the “deployment of its National Guard throughout Mexico, giving priority to its southern border.”

But the Mexican government had already pledged to do that in March during secret talks in Miami between Kirstjen Nielsen, then the secretary of homeland security, and Olga Sanchez, the Mexican secretary of the interior, the officials said.

The centerpiece of Trump’s deal was an expansion of a program to allow asylum-seekers to remain in Mexico while their legal cases proceed.

But that arrangement was first reached in December in a pair of painstakingly negotiated diplomatic notes that the two countries exchanged.

Nielsen announced the Migrant Protection Protocols during a hearing of the House Judiciary Committee five days before Christmas.

And over the past week, negotiators failed to persuade Mexico to accept a “safe third country” treaty that would have given the United States the legal ability to reject asylum seekers if they had not sought refuge in Mexico first.

“Everyone very excited about the new deal with Mexico!” He thanked the president of Mexico for “working so long and hard” on a plan to reduce the surge of migration into the United States.

It was unclear whether Trump believed that the agreement truly represented new and broader concessions, or whether the president understood the limits of the deal but accepted it as a face-saving way to escape from the political and economic consequences of imposing tariffs on Mexico, which he began threatening less than two weeks ago.

Having threatened Mexico with an escalating series of tariffs — starting at 5 percent and growing to 25 percent — Trump faced enormous criticism from global leaders, business executives, Republican and Democratic lawmakers, and members of his own staff that he risked disrupting a critical marketplace.

But there remains deep skepticism among some American officials — and even Trump himself — about whether the Mexicans have agreed to do enough, whether they will follow through on their promises, and whether, even if they do, that will reduce the flow of migrants at the southwestern border.

In addition, the Migrant Protection Protocols already face legal challenges by immigrant rights groups who say they violate the migrants’ right to lawyers.

A federal judge blocked the Trump administration from implementing the plan, but an appeals court later said it could move forward while the legal challenge proceeds.

Friday’s agreement with Mexico states that the two countries “will immediately expand” the Migrant Protection Protocols across the entire southern border.

To date, migrants have been returned at only three of the busiest ports of entry.

But officials familiar with the program said today that the arrangement struck by the two countries last December always envisioned that it would expand along the entire border.

What kept that from happening, they said, was the commitment of resources by both countries.

In the United States, migrants must see immigration judges before they can be sent to wait in Mexico, and a shortage of judges slowed the process.

The Mexican government also dragged its feet on providing the shelter, health care, job benefits and basic care that would allow the United States to send the migrants over.

The new deal reiterates that Mexico will provide the “jobs, health care and education” needed to allow the program to expand.

But the speed with which the United States can send more migrants to wait in Mexico will still depend on how quickly the government follows through on that promise.

Perhaps the clearest indication that both sides recognize that the deal might prove insufficient is contained in a section of Friday’s agreement titled “Further Action.”

One official familiar with the negotiations said the section was intended to be a serious warning to the Mexican government that Trump would be paying close attention to the daily reports he received about the number of migrants crossing the border.

The official said that if the numbers failed to change — quickly — the president’s anger would bring the parties back to the negotiating table.

“The tariff threat is not gone,” the official said. “It’s suspended.”