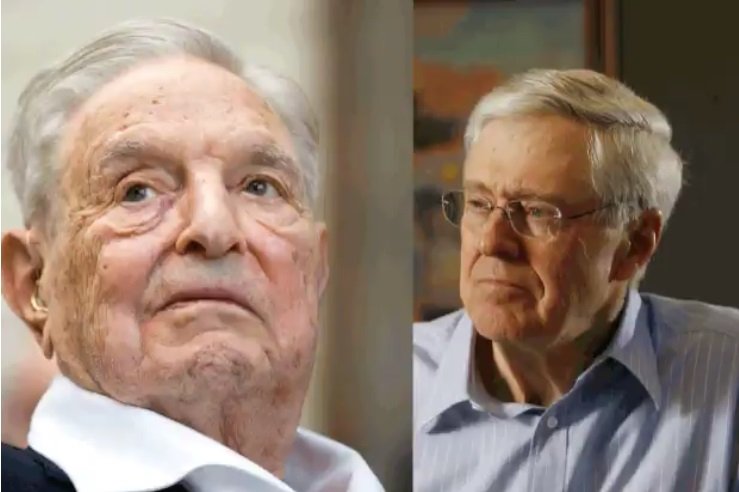 Its mission: to make the case against foreign wars.

The Boston Globe broke the story yesterday, calling the team-up “one of the most remarkable partnerships in modern American political history.”

Soros is, of course, widely hated on the right for his support of liberalized immigration and is frequently the target of anti-Semitic conspiracy theories.

Koch, meanwhile, has come under fire for his contributions to the Republican Party and his opposition to climate policies.

The Quincy Institute is named for US President John Quincy Adams, who said in an 1821 speech that America “goes not abroad in search of monsters to destroy.”

In a statement on its bare-bones website, the institute argues that we’ve betrayed that vision — and that the consequences have been horrific, both from a humanitarian standpoint and in terms of America’s national interests.

The Globe reported that the institute will open in September, with an official inauguration planned for later in the fall.

Soros’s Open Society Foundations and Koch’s Charles Koch Foundation each contributed half a million dollars to launch it, and other individual donors added another $800,000 in funding.

“The foreign policy of the United States has become detached from any defensible conception of U.S. interests and from a decent respect for the rights and dignity of humankind,” the institute argues in the initial statement on its website. It aims to promote “ideas that move U.S. foreign policy away from endless war and toward vigorous diplomacy in the pursuit of international peace.”

Soros and Koch don’t see eye to eye on much, but on this they’re in agreement. (They’ve also found themselves allied on mass incarceration and combating online extremism).

While in many respects libertarians have been politically aligned with the GOP establishment — most self-identified libertarians vote for Republicans, Charles Koch himself is a Republican, and the Koch Institute has largely donated to the GOP — they often break with neoconservatives on foreign policy.

“To me, foreign policy is a form of insanity,” Charles Koch said in a TV appearance with his brother in 2015. “We keep kicking out dictators and then we don’t get anything better, and we mess up a lot of people’s lives in the process — spend fortunes and have Americans killed and maimed. What do we have to show for it?”

That’s not just a position that separates them from the GOP, it’s a break with mainstream Democrats, too.

Liberals frustrated with the war-friendly Democratic establishment foreign policy consensus have been complaining about this for years.

Soros, a Hungarian American Holocaust survivor, has been criticizing American militarism for a while now; in 2006, he wrote in the Wall Street Journal that in the so-called War on Terror, “It is not our will that is being tested, but our understanding of reality.”

“An endless war waged against an unseen enemy is doing great damage to our power and prestige abroad and to our open society at home,” he wrote. “It has led to a dangerous extension of executive powers; it has tarnished our adherence to universal human rights; it has inhibited the critical process that is at the heart of an open society; and it has cost a lot of money.”

Many billionaires engage in philanthropy.

But Soros and Koch are among the billionaires who have most directly leveraged their philanthropy to advance their respective worldviews.

Soros now has a net worth of $8 billion after having donated more than $32 billion to his philanthropic agency, Open Society Foundations.

Charles Koch, one of the richest men in the world, has a net worth estimated at $50 billion.