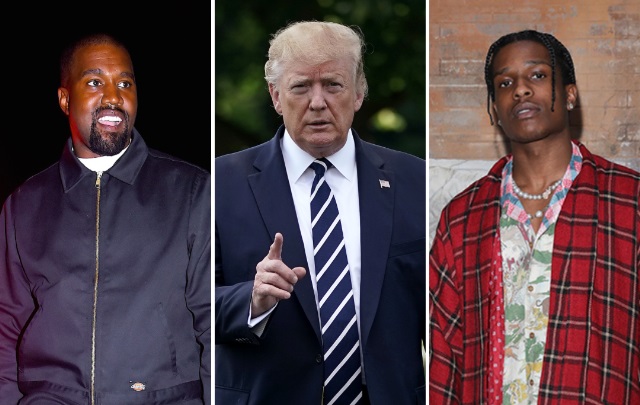 “Just had a very good call with @SwedishPM Stefan Löfven who assured me that American citizen A$AP Rocky will be treated fairly. Likewise, I assured him that A$AP was not a flight risk and offered to personally vouch for his bail, or an alternative,” Trump tweeted Saturday morning.

“Our teams will be talking further, and we agreed to speak again in the next 48 hours!”

….Our teams will be talking further, and we agreed to speak again in the next 48 hours!

Though the New York artist hasn’t been charged with a crime, he has been held in a Swedish jail since earlier this month after he was involved in a June street fight in Stockholm.

A Swedish court ruled Friday that he could be held at least another week as prosecutors determined whether to charge him.

Rocky is under investigation for suspicion of assault after a video emerged last month apparently showing the rapper tossing a young man to the ground while on tour.

The rapper and his associates have claimed the individual and a friend were harassing them and instigated the conflict by hitting Rocky’s bodyguard with a pair of headphones.

Rocky’s attorney has described the altercation as self-defense.

Rocky’s case quickly developed into a cause célèbre following reports that he was being detained in inhumane conditions.

Tyler, the Creator, Diddy, Justin Bieber, Schoolboy Q, and other high-profile artists have proclaimed their support for the artist, and the State Department, which reportedly sent an official to the country to intervene, has said “there are certainly some facts about the arrest and detention that raise concerns.”

Rocky’s case was first raised to White House senior adviser Jared Kushner by Kim Kardashian West, who has teamed up with the White House in the past to tackle criminal justice reform.

Kushner brought the situation to Trump, who reportedly in turn asked Secretary of State Mike Pompeo to work toward the rapper’s release.

“We’re working with State Department and we hope to get him home soon,” First Lady Melania Trump echoed.