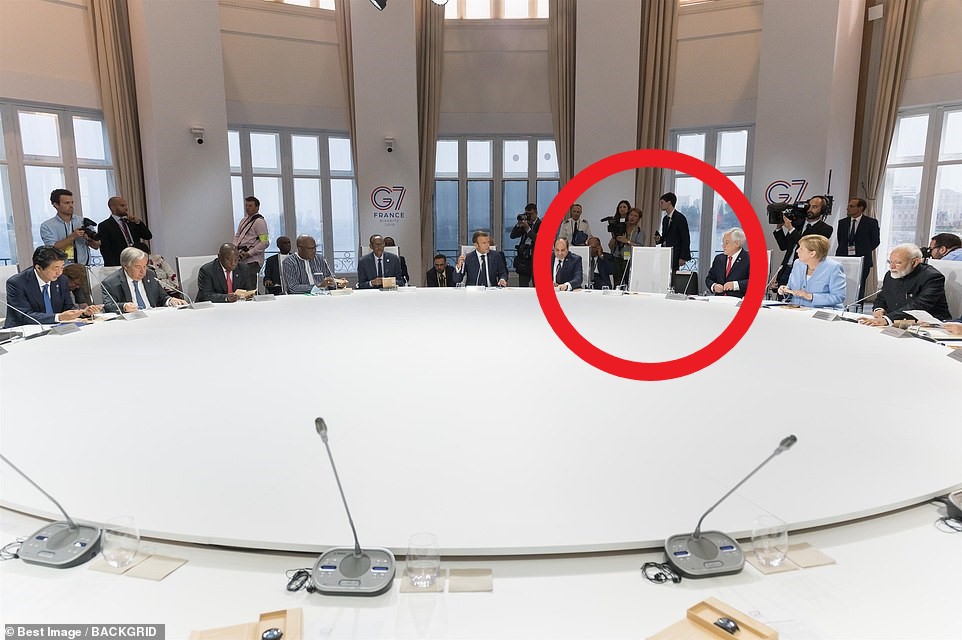 President Trump did not attend today’s crucial discussion on climate and biodiversity at the G7 meeting of international leaders in Biarritz, missing talks on how to deal with the Amazon rainforest fires as well as new ways to cut carbon emissions.

Trump was later asked by reporters covering a meeting with the German chancellor, Angela Merkel, whether he had attended the climate session.

He replied: “We’re having it in a little while.”

He did not appear to hear when a reporter told him it had just taken place.

At the press conference he said he knows ‘more about the environment than most people’ in part due to his time as a builder, when environmental concerns often pose last-minute roadblocks to a project.

At a summit where relentless fires in the Amazon provided a backdrop, Trump did not respond directly when asked if he still harbored doubts about global warming, vouching for his environmental credentials by pointing to numerous environmental impact statements he has been involved with.

‘I went the cleanest water on earth. I want to cleanest air on earth. And that’s what we’re doing. I’m an environmentalist,’ he said.

Just before the session began on Saturday, it appeared that Trump’s entourage felt discussing climate was of little importance, compared with the economy.

Reports in the US said senior Trump aides felt Macron was seeking to embarrass his US counterpart by making the summit focus on “niche issues” such as climate change or gender equality.

In 2017, Trump pulled the US out of the Paris climate accord.

Macron announced that the G7 had agreed to an immediate fund of at least $20m to help Amazon countries fight wildfires and launch a long-term global initiative to protect the rainforest.

He said the Amazon was the “lungs” of the planet and leaders were studying the possibility of similar support in Africa, also suffering from fires in its rainforests.

All G7 countries – the US, Japan, Germany, France, Italy, Britain and Canada – would give technical and financial help to fight the Amazon fires.

Macron had shunted the Amazon fires to the top of the summit agenda after declaring them a global emergency, and kicked off discussions about the disaster at a welcome dinner for fellow leaders on Saturday.