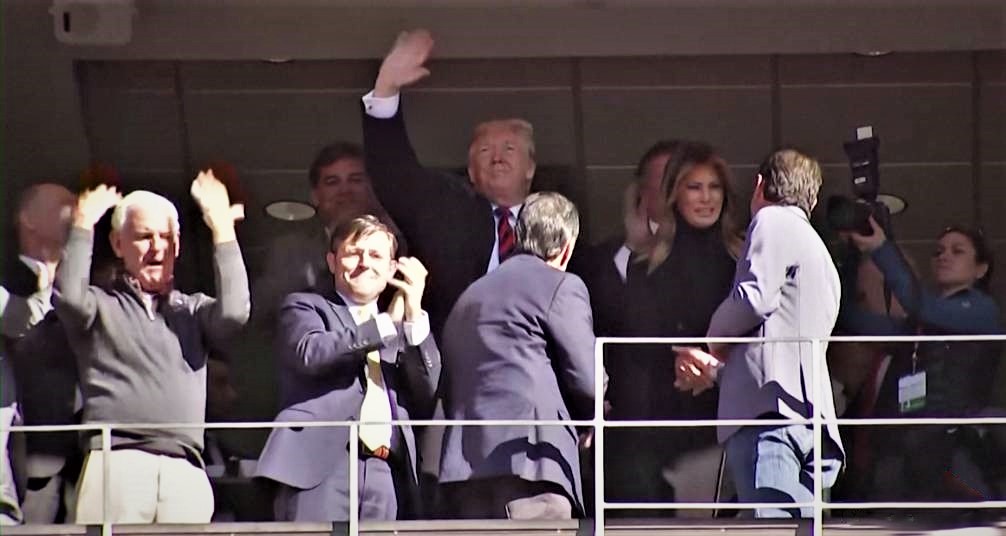 Alabama is a dependable Republican state, and President Trump received an expected mostly cheerful welcome from the crowd attending Saturday’s major college football game between the University of Alabama and Louisiana State University.

Before the game’s kickoff, Trump and first lady Melania received a big cheer as they waved to the crowd at Bryant-Denny Stadium in Tuscaloosa, Alabama.

The crowd broke out in a “USA” chant and cheers of “Trump 2020” shortly after the Trumps were introduced.

Not everyone in the stadium of over 100,000 people, however, noticed the first couple when they were shown on the venue’s screens.

President Donald Trump and First Lady Melania Trump greeted with cheers and chants of “USA” and “Trump 2020” here in Tuscaloosa at #AlabamaVsLSU.

The Trumps were announced during the first timeout. Alabama fumbled in the red zone right after. pic.twitter.com/cqBFegmYs0

During the game’s first timeout, when Trump and first lady were more formally introduced, there appeared to be some boos mixed in with the overwhelming cheers.

Trump won Alabama with 63 percent of the vote in the 2016 presidential election.

Before kickoff, Trump mingled with the guests seated with him in the suite.

The Trumps were joined in their guest box for the game by Republican politicians from Louisiana and Alabama, including GOP congressman Bradley Byrne.

Byrne is running in the Alabama Republican primary for US Senate against Trump’s former Attorney General Jeff Sessions.

The box belongs to Jim Wilson, an Alabama real estate businessman and University of Alabama board of trustee member.

During halftime, the President and first lady waved to the crowd as the Alabama marching band performed their tribute to the US troops for Veterans Day weekend.

The President also waved and gave a thumbs up to various members of the crowd.

Trump left the game with about eight minutes left in the fourth quarter.

It was a friendlier crowd in Tuscaloosa than the ones that greeted him at a World Series game in Washington, DC, and in his hometown of New York City for a UFC fight.

The inflatable figure depicting a baby Donald Trump wearing a diaper, which has been seen at protests around the world, made an appearance in Tuscaloosa.

A protester carried a sign that said “Roll Tide Impeach 45” and a woman held a signing saying she had sold her ticket and donated the money to the Alabama Democratic Party.

But there were more pro-Trump signs. One woman wore an oversized red MAGA hat and carried a sign saying: “Make BAMA #1 Again.” There were flags emblazoned with “Trump 2020” and banners that read: “Keep America Great Trump 2020.”