EXCLUSIVE: 197 Days To Go Until The Election – All Eyes On Pennsylvania

In just 197 days, Americans will go to the polls and determine whether Donald Trump should continue living in the White House, or decide to turn to Joe Biden for a different direction.

JimHeath.TV has been evaluating where the presidential race stands in all 50 states, with a special emphasis on truly competitive battlegrounds.

We will present regular updates over the course of the summer and fall.

Our first 2020 look at the electoral college map shows the vast majority of red/blue states continue to be dug into their partisan leanings, even in wake of the coronavirus pandemic.

States that have voted red since 2000 are likely to continue that trend, the same for blue states.

Here’s a look at where things stand, with the states in grey listed as truly competitive this year: 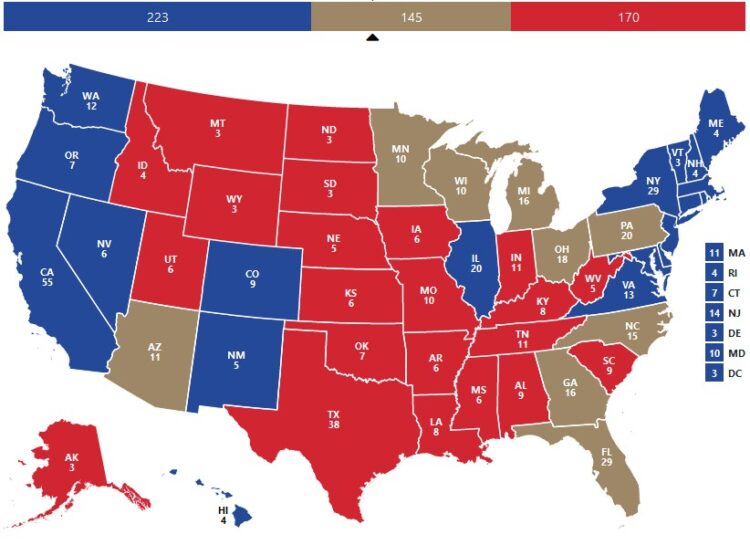 This map shows Biden leading Trump in the electoral college 223-170.

All of these states, with the exception of Minnesota, backed Trump in 2016.

Based on polls and historic trends, here is where we believe we are actually at as of April, 2020: 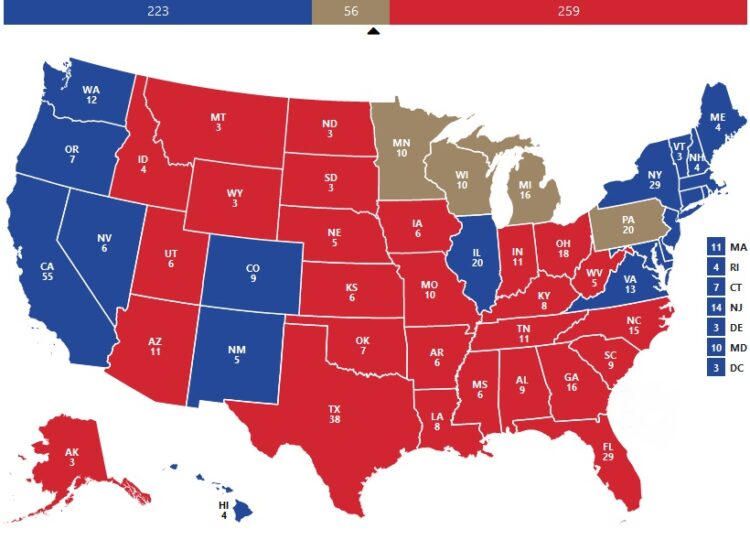 Here, we have Trump leading Biden in the electoral college 259-223.

We have awarded him Florida, Ohio, Georgia, North Carolina and Arizona.

That leaves the four critical states in this election: Pennsylvania, Michigan, Minnesota and Wisconsin.

Based on current polls and trends, we see the map going this way: 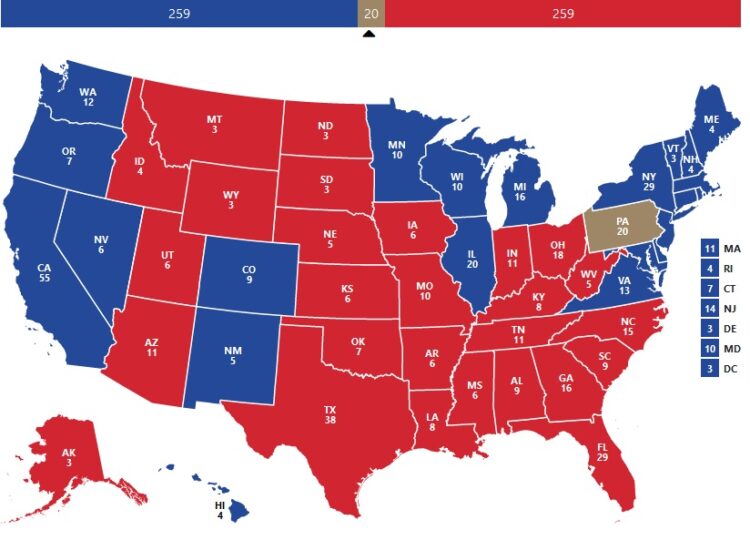 Biden holds on to Minnesota, and picks up the former Democratic firewall states of Michigan and Wisconsin (both have had Democratic trends since 2018).

That leaves the election at 259 electoral votes for both Biden and Trump, with Pennsylvania the deciding state.

Biden was raised in Scranton, and has a special blue collar appeal in that state that Hillary Clinton did not have in 2016. 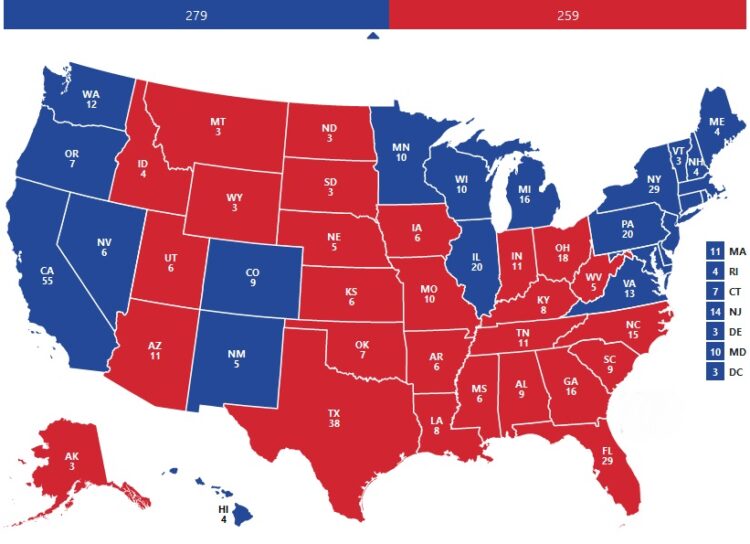 Giving Biden the win with 279 electoral votes to Trump’s 259.

Biden leads in recent polling in Arizona, which has not voted for a Democratic presidential candidate since Bill Clinton.

Trump is doing much better in Minnesota, a state Republicans hope to tip red this year.

If you flip both of those states, and keep everything else the same, Biden still wins by an additional electoral vote 280-258. 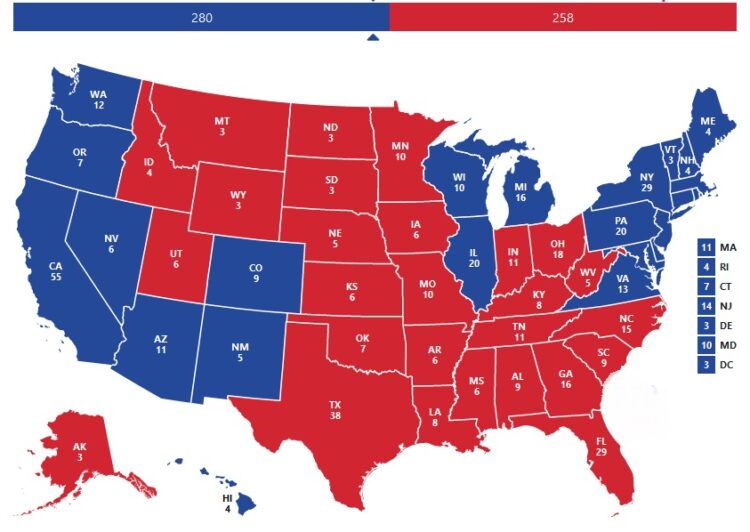 In this analysis we do not show Ohio as a battleground state, which it could easily become again.

We also do not believe Iowa or Texas are in play for Democrats.

Biden’s impressive showing thus far in Arizona and Florida is because of older voters, who represent an above-average share of white voters in the two states.

On average, Biden leads among voters over age 65 by a margin of 53 percent to 44 percent nationwide, including a lead in every live-interview national poll reporting a result for the group.

It is a substantial improvement over Hillary Clinton’s six-point deficit among the group in 2016.

It is also worth noting that Biden’s primary election performances across the country have been significantly better than Clinton’s were four years ago.

Of course no one knows what the election will look like come fall.

The coronavirus pandemic raises additional questions about the eventual turnout, particularly if it leads to widespread voting by mail.

But no matter the method, Democrats typically find themselves at a turnout disadvantage, and it is doubtful that Biden will maintain the whole of his current polling advantage among likely voters.

The passion of Trump supporters to head to the polls is high, and there is no reason to believe Republicans will be inclined to stay home this election.

While we have a slight electoral vote advantage to Biden 197 days out, we are still calling this election too close to call. 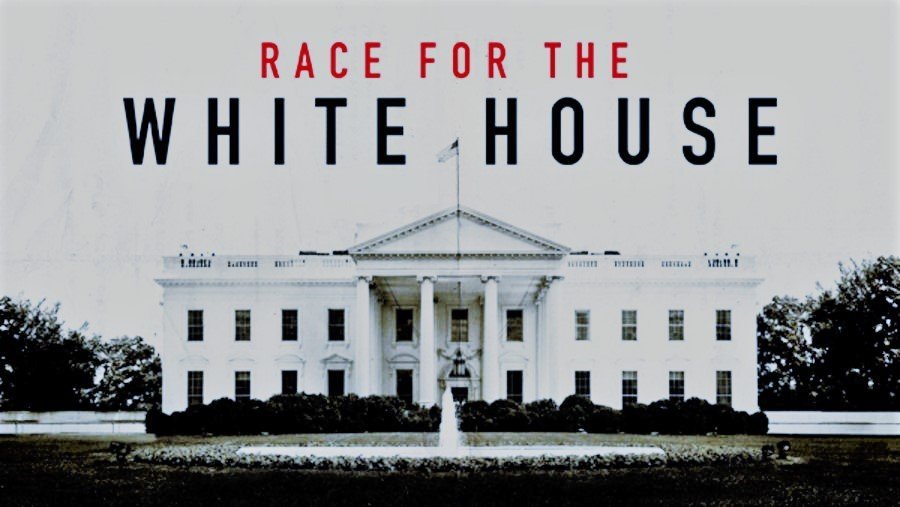