Resignations After Breitbart Disses Own Reporter 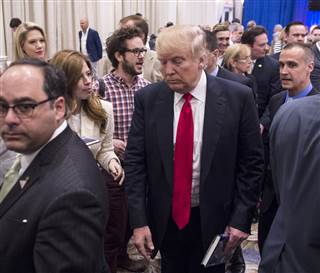 A reporter for the conservative website Breitbart has resigned after her bosses refused to support her claims of an alleged assault by Donald Trump’s campaign manager.

Reporter Michelle Fields says while asking Trump a question after an event last week campaign manager Corey Lewandowski grabbed her arm so hard it bruised it.

Here is her account of what happened: “I wasn’t called upon to ask a question during the televised press conference, but afterwards Trump wandered around, stopping at every reporter to take their questions. When he approached me, I asked him about his view on an aspect of affirmative action. Trump acknowledged the question, but before he could answer I was jolted backwards. Someone had grabbed me tightly by the arm and yanked me down. I almost fell to the ground, but was able to maintain my balance. Nonetheless, I was shaken.”

Video from the event seems to show Lewandowski grabbing Fields arm, but Trump has responded that he believes she is making up the story.

“Both Lewandowski and Trump maligned Michelle in the most repulsive fashion,” Shapiro said. “Meanwhile, Breitbart News not only stood by and did nothing outside of tepidly asking for an apology, they then attempted to abandon Michelle by silencing staff from tweeting or talking about the issue.”

“Breitbart News is no longer a journalistic enterprise, but instead, in my opinion, something resembling an unaffiliated media Super PAC for the Trump campaign,” Schachtel said. “I signed my contract to work as a journalist, not as a member of the Donald J. Trump for President media network.”

Breitbart has not officially commented on the resignations. The website has promoted pro-Trump coverage since shortly after he entered the race.