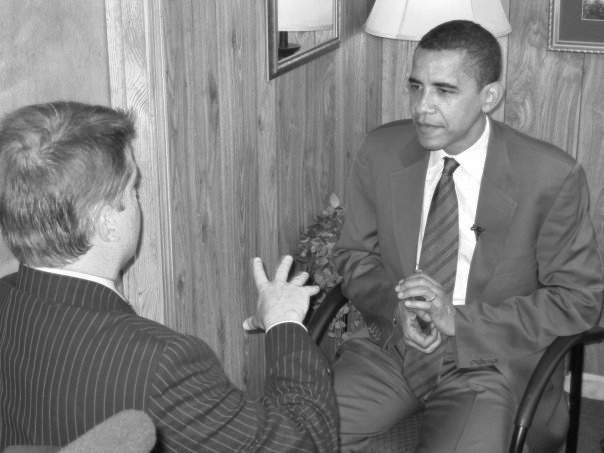 Eight years ago then Sen Barack Obama came to South Carolina to campaign for the first-in-the-south presidential primary. I sat down and interviewed him in Dillon, South Carolina, and we discussed a variety of topics including education, Bill and Hillary Clinton, whether America was ready for its first black president… and Cuba.  Here is an excerpt from my new book Front Row Seat at the Circus.

From Chapter “A Foreign Sounding Name”

Just days before the interview, Obama had made news by suggesting America should begin the process of normalizing relations with Cuba.

Many conservatives, and some Democrats, were outraged. But at least one Republican, Congressman Jeff Flake of Arizona, said he agreed with Obama.

“There’s been criticism this week about your stand on Cuba,” I asked. “Yet, there are some conservatives in Congress, like Jeff Flake, who have called for a complete lifting of the embargo so you do have some bipartisan support. Are you surprised how political the response was rather than a discussion of whether this is a good idea?”

“No, look, Cuba’s been a hot button political issue for quite some time,” Obama responded. “The fact is, what I called for was not an end to the embargo. It was relatively modest; it said, let’s make sure family members can travel to Cuba. So let’s lift the travel ban so that people can visit their mother or grandmother. And let’s make sure that that we loosen up the remittance mechanism so that Cuban Americans here can send money to help their family members in Cuba. I think it is possible as Fidel Castro dies, that we then have an opportunity to start opening up a new dialog with Cuba. And I hope that over time, we can bring them back into the community of nations and that they will release political prisoners and we’ll start seeing a normalization of relations. But that is probably a bit further down the road.”