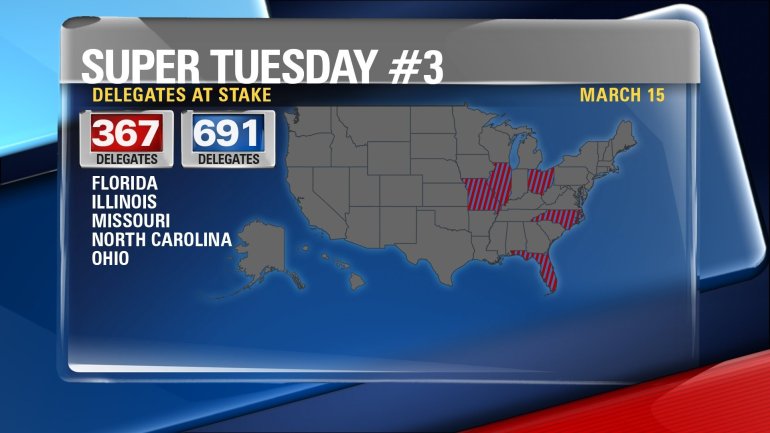 The third Super Tuesday in a row will be a yugeeee night for both Donald Trump and Hillary Clinton, but neither will have a clean-sweep. At least that’s my conclusion after reviewing all the recent polling, the cash being spent in each state, and a variety of other factors including spring break (which isn’t helpful to Sanders). Here we go:

NOTES: Ohio is a big win for John Kasich, guaranteeing him his own states delegation at the GOP convention in Cleveland. It does nothing, however, to set him on the path to the nomination. If Trump somehow steals Ohio from Kasich the nomination will be his. It would give him another bag of winner-take-all delegates, knock Kasich out of the race and leave only the weak southern regional candidate Ted Cruz around. Once again for Republicans it all comes down to Ohio. Trump’s big win in Florida will give him another 99 delegates and knock Marco Rubio out of the race (at least for now, see my previous post.) Cruz’s best hope is in Missouri which is a heavy evangelical state. The fact he hasn’t been able to seal-the-deal there shows how weak he’s been in places he should be easily winning.

NOTES: After Michigan, the Clinton campaign should be very, very worried. The Midwest is no longer Clinton Country as it had been in 2008. Sanders has come up thirty points in polls in both Ohio and Illinois. I still think Clinton hangs on in Ohio, however, due to her enormous backing from the African American community. Both camps will be watching the returns from Cuyahoga County very carefully. Two factors to consider: Has former state senator Nina Turner been able to sway black Clinton supporters to Sanders? And how many Democrats will jump into the Republican primary to help out Kasich? If the answers to both questions is “a lot” Clinton will suffer. A note to those not familiar with election night in Ohio: The votes from the northeast part of the state typically come in last. So don’t make any projections on what you’re seeing early because I’ve watched many races flip with 90 percent of the votes counted based on the huge amount that comes in late from Cleveland. Next door in Illinois the race could be tight, but hey, Clinton is from there. That has to count for something. The delegates she wins in Florida will be.. yuge.

The results Tuesday should answer these two important questions: 1) Is the Sanders phenomenon real or was Michigan a fluke? 2) Can Trump be stopped before reaching 1,237 delegates and clinching the nomination?