TABLOID CLAIMS CRUZ IS A PERVERT 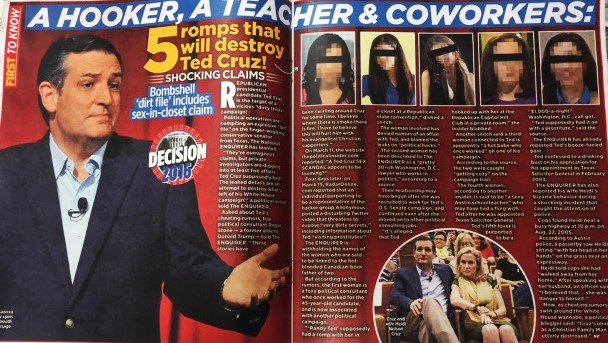 In my book Front Row Seat at the Circus I write about meeting and interviewing John and Elizabeth Edwards eight years ago. In the chapter I note that the National Enquirer scooped all of us by uncovering and reporting on the ongoing affair John Edwards was having with a campaign staffer. It put his campaign, and the entire Democratic Party, at risk.

How did a tabloid scoop every other standard media organization in America? It still burns me.

So it brought me to a complete stop yesterday when I was in a grocery store line and saw this National Enquirer headline:

First, thinking of charisma-challenged Ted Cruz being “pervy” with not just one mistress – but five – is gross. It’s a thought difficult to get out of your head.

Second, Cruz, who denies the story, is probably right when he blames Donald Trump and his “henchmen” for leaking it. “Pervy Ted” sounds an awful like “Lyin’ Ted.”

Third, there is laughable irony in the fact that Trump is the one who has been married multiple times and has admitted to his own multiple “personal indiscretions.” My guess is we haven’t even started to see the dirt on Trump that is coming after he’s the nominee.

If Cruz is right then the Trump campaign is playing to the lowest voter denominator. This type of easy-to-understand sleaze plays well with the WWE crowd.

But Trump is playing with fire. He risks Cruz joining Mitt Romney and Marco Rubio and other GOPers in backing a third party conservative alternative this fall. If that happens, Trump loses the battlegrounds and goes back to his shiny deluxe apartment in the sky.

I post this story with memories on how the National Enquirer got the Edwards story right. There’s always a chance, I suppose, that Ted really is pervy.