For Clinton, Brown is a slam-dunk running mate 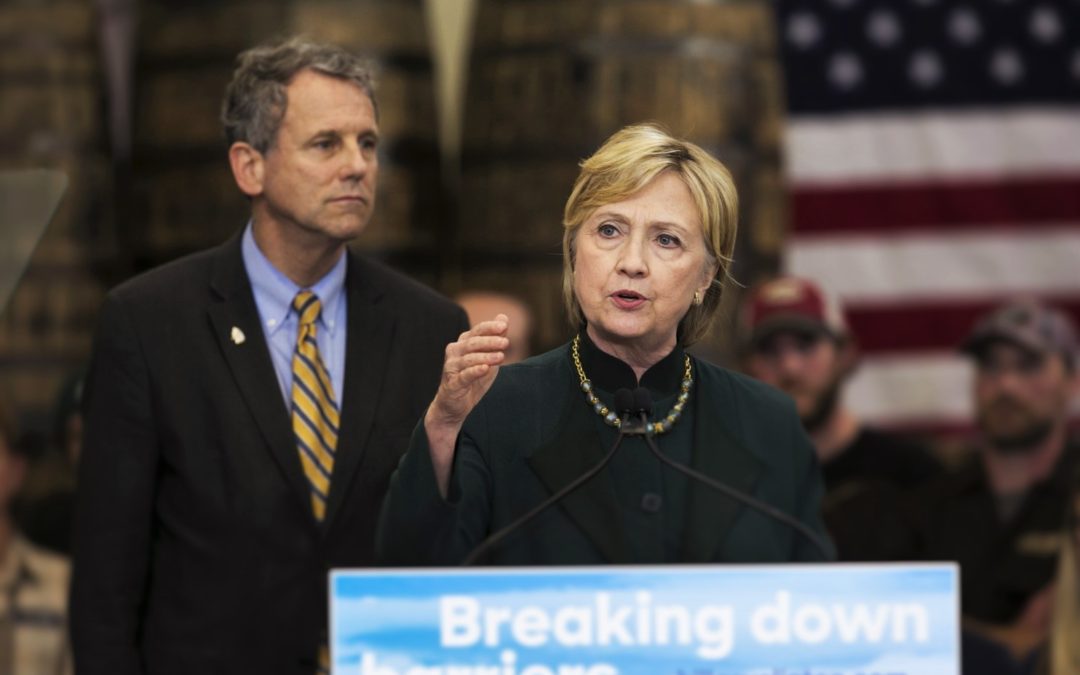 Hillary Clinton needs as her running mate a white, male, Midwestern, progressive who is fearless of the press and a proven winner in a battleground state.

As in that Ohio. Battleground Ohio. The state that determines who makes it to 270 electoral votes and wins.

As I wrote in my book Front Row Seat at the Circus:

While Sherrod Brown would make an interesting selection as a running mate for a moderate Democratic presidential nominee—like Hillary Clinton—in 2016 (think Ohio, progressive, unions, scrappy campaigner) he has denied repeatedly that he’s interested. His prospects for reelection in 2018, however, are less promising considering how poorly Democrats have done statewide recently in non-presidential election years. The U.S. Chamber of Commerce, and the Koch brothers, are sure to make him a top target once again.

This is a perfect partnership for both Clinton and Brown. For Clinton, she gains a credible progressive who can help her with Bernie supporters, and the bonus of having an Ohioan on the ticket. For Brown, this is his escape hatch out of a reelection battle that is likely not to go his way in 2018.

Brown has told me repeatedly he has no interest in national office. But what if his party, and his country, come calling?

In addition, as I wrote in my book, Brown is one of the most honest politicians you’ll ever find:

In fact, of all the politicians I’ve known through the years, Brown has the distinct honor of being the one who is easiest to detect telling a lie. Most senators and governors are highly skilled in being able to look you directly in the eye and tell you something you know for a fact is not accurate. John Kasich telling me over and over again he had no interest in running for president in 2016 comes to mind. Brown, on the other hand, will squirm in a chair and start sputtering his sentences, which is a dead giveaway for reporters.

As an example, shortly before the 2014 election when it appeared Democrats were going lose every statewide office in Ohio, I asked Brown whether state Democratic Party chairman Chris Redfern would be replaced. Brown tensed up, shrunk in his seat, and softly gave this reply, “I don’t know, I want to see what happens on Election Day.”

Most senators would have said something like, “We are a united team, and we still expect great things on Election Day, and I’m not worried about that.” But Brown has been incapable of spinning what he knows isn’t true. I said to my photographer on the way back to the station, “Brown just told us Redfern’s fate.”

Shortly before the 2012 election, I asked Brown during a conversation about his relationship with President Obama. If ever there should be political camaraderie in Washington, D.C., you would think it would be between these two. In my mind, I thought Brown would be a loyal progressive soldier for the administration, helping carry their legislative proposals.

“Going into the Oval Office is terrible,” Brown told me. I was a bit taken aback by the honesty so close to the election.

“Define terrible for me,” I replied.

“Back in the Clinton years, you would go into the Oval Office with Bill and he would ask about your family, and remember things you were working on in your state and district. He truly wanted to talk to you.”

“Thus why he was always on Clinton Time,” I chuckled.

Brown agreed and continued, “Obama is the opposite. He’s a law professor, he sits you down and tells you what he knows and expects you to think the same way. He doesn’t relate well to people. The only reason why he’s winning this election is because the Republicans nominated someone who is even worse.”

Yet another brutally honest assessment from Ohio’s senior senator.

Since 1940, every Democratic vice presidential nominee, with only two exceptions, has been a sitting U.S. Senator. Brown is a respected and scrappy campaigner, a champion of unions and progressives, and he can handle the national press. In battlegrounds like Ohio, Florida and Virginia he is the perfect compliment to a more centrist Clinton.

Rarely do I say anything in politics is a slam dunk. But this one is obvious.