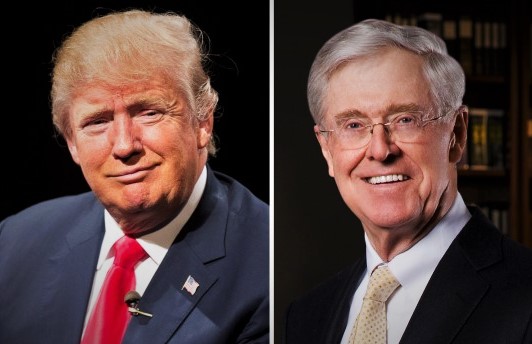 “It’s either racist or it’s stereotyping,” said Koch. “It’s unacceptable, and it’s taking the country in the wrong direction.”

In the world of GOP politics, Charles and David Koch, the face of America’s Big Oil, are a very big deal. The Koch organization is expected to raise and spend $450 million on campaigns this year. So far it has spent $15.4 million in advertising in Ohio, Pennsylvania, Wisconsin and Nevada to help Republican senate candidates.

Last week, Trump said Curiel, who was born in Indiana, is a Mexican who is not handling a case involving Trump University fairly because of his stances on immigration. The comment has brought wide-spread criticism from Republicans and conservatives.

Koch, a brash billionaire like Trump, told USA Today he’s not prepared to support the presumptive Republican nominee. That threat is a serious blow to the Trump campaign not just financially, but in the micro-targeting apparatus the Koch team has constructed in battleground states like Ohio.

Asked whether he thought Trump was fit to be president, Koch said: “I don’t know the answer to that.”

In addition to concerns about Trump’s fitness for the office, Koch said Free Trade remains a major policy disagreement.

The Trump campaign has asked for Koch’s support, despite the candidate condemning his Republican challengers for seeking it during the primary season.

I wish good luck to all of the Republican candidates that traveled to California to beg for money etc. from the Koch Brothers. Puppets?