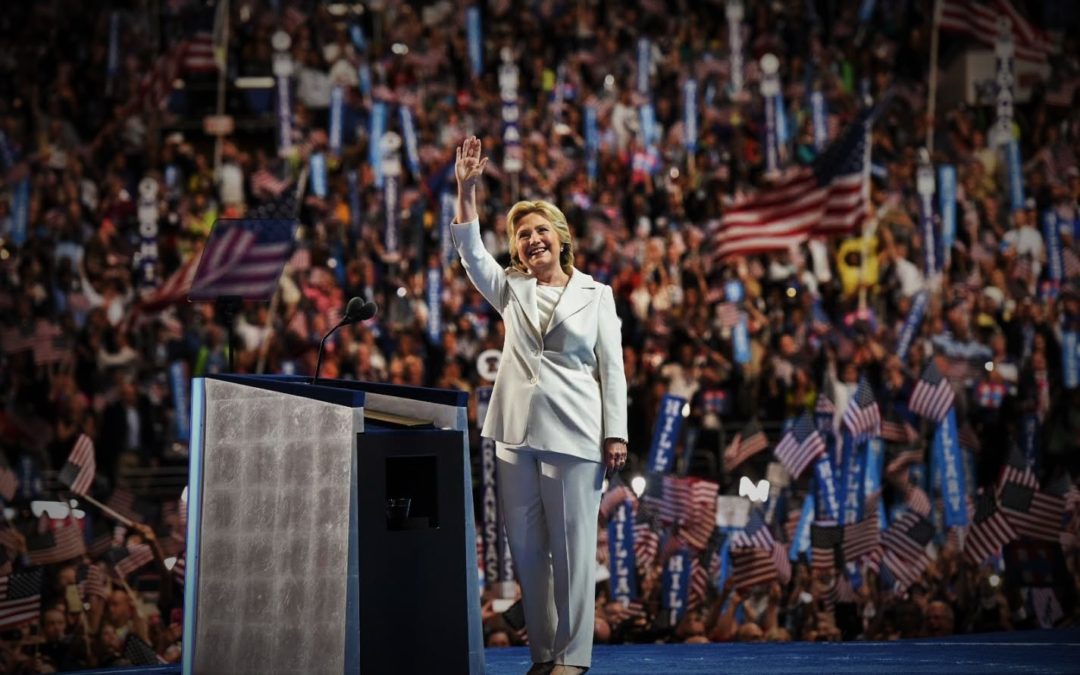 Hillary Clinton became the first woman of a major political party to accept her party’s nomination, and she went right after her Republican opponent Donald Trump with a blend of patriotism and populism.

It was a speech that, when finished, over 86 percent of CNN watchers found to be positive, and 60 percent said they were now more likely to vote for her.

Clinton started her speech, with delegates holding American flags and signs that read “USA” by mentioning the tough work and compromise made by America’s first leaders.

“Our Founders embraced the enduring truth that we are stronger together,” said Clinton. “America is once again at a moment of reckoning. Powerful forces are threatening to pull us apart. Bonds of trust and respect are fraying.”

She then unleashed a series of optimistic themes, as we predicted earlier. First she used a popular slogan made famous by former President Ronald Reagan.

“Trump’s betting that the perils of today’s world will blind us to its unlimited promise,” said Clinton. “He’s taken the Republican Party a long way…  from “Morning in America” to  “Midnight in America.” He wants us to fear the future and fear each other.”

Then she dropped one of the most famous presidential lines from former President Franklin Roosevelt.

“A great Democratic President, Franklin Delano Roosevelt, came up with the perfect rebuke to Trump more than eighty years ago, during a much more perilous time.  “The only thing we have to fear is fear itself.”

Before Clinton took the stage, a variety of Republicans announced they were supporting her, and not Trump. None, however, questioned his sanity as former New York mayor Michael Bloomberg did Wednesday night.

John Allen, a retired four-star general who commanded troops in Afghanistan, lambasted Trump’s world view and provided a foreign policy hawk’s rationale for choosing Clinton over Trump. The Clinton camp is hoping there is a significant block of GOP votes, led by the last two Republican presidents and the last nominee Mitt Romney, they can pick up by November.

During her 45 minute remarks, Clinton went after Trump for suggesting in Cleveland that he alone can fix some of the problems facing the country.

Clinton also mentioned the historic nature of her nomination.

“Tonight, we’ve reached a milestone in our nation’s march toward a more perfect union:  the first time that a major party has nominated a woman for President,” said Clinton. “Standing here as my mother’s daughter, and my daughter’s mother, I’m so happy this day has come. Happy for grandmothers and little girls and everyone in between.”

The Democratic nominee went through a list of things she’ll work on in her first 100 days. As to how to pay for them, Clinton went to the left.

“Wall Street, corporations, and the super-rich are going to start paying their fair share of taxes,” said Clinton. “Not because we resent success. Because when more than 90% of the gains have gone to the top 1%, that’s where the money is. And we are going to follow the money.”

On the military and fighting ISIS, “Donald Trump says, and this is a quote, “I know more about ISIS than the generals do…. No, Donald, you don’t.”

Trump’s temperament was also included in Clinton’s attack on her GOP opponent.

“Does Donald Trump have the temperament to be Commander-in-Chief?  Donald Trump can’t even handle the rough-and-tumble of a presidential campaign,” Clinton laughed. “He loses his cool at the slightest provocation.  When he’s gotten a tough question from a reporter.  When he’s challenged in a debate.  When he sees a protestor at a rally.  Imagine him in the Oval Office facing a real crisis. A man you can bait with a tweet is not a man we can trust with nuclear weapons.”

True to the point, Trump went on a twitter rampage in response.

Hillary’s refusal to mention Radical Islam, as she pushes a 550% increase in refugees, is more proof that she is unfit to lead the country.

Our way of life is under threat by Radical Islam and Hillary Clinton cannot even bring herself to say the words.

Hillary’s vision is a borderless world where working people have no power, no jobs, no safety.

Hillary’s wars in the Middle East have unleashed destruction, terrorism and ISIS across the world.

No one has worse judgement than Hillary Clinton – corruption and devastation follows her wherever she goes.

Clinton ended her speech by again expressing patriotic themes and unity and contrasting it to Trump.

“For the past year, many people made the mistake of laughing off Donald Trump’s comments – excusing him as an entertainer just putting on a show. But here’s the sad truth: There is no other Donald Trump…This is it. And in the end, it comes down to what Donald Trump doesn’t get: that America is great – because America is good.”