“Vote Your Conscience” Was Perot Slogan 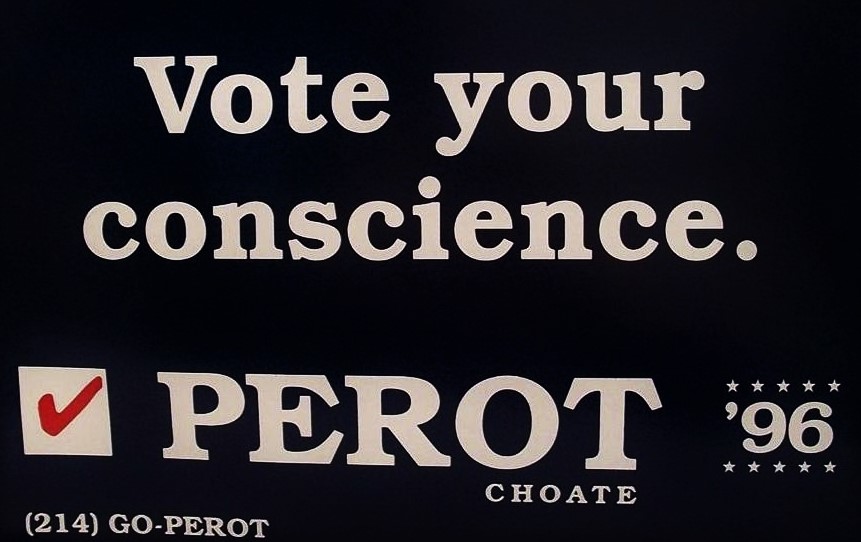 If “vote your conscience” rang a bell when Ted Cruz said it Wednesday night, it’s because you remember it from Ross Perot’s campaign signs, buttons and television ads back in the 1990’s.

Perot was the Donald Trump before Trump. He was a loud and opinionated billionaire who self-funded two presidential campaigns, one in 1992, and the other in 1996.

Perot ran as an independent in ’92, which led to the creation of the Reform Party in 1996. It was an anti-establishment movement backed by Americans who were angry about the economy, bad trade deals, and a lack of leadership in Washington.

Like Trump, Perot had a lot of confidence he could easily solve all the nations troubles. “I can solve the problem of the national debt without working up a sweat,” said Perot at campaign events. “It’s just that simple.”

Donald Trump prepares to seek the presidency on the Reform party ticket in 2000.

Trump loved the Reform Party. In 1999, then a registered independent, he seriously considered seeking the Reform Party presidential nomination, even going so far as to create an exploratory committee.

Perot, who, like Trump, hated the Bush family, received a remarkable 19 million votes in 1992. During one presidential debate he suggested the mistakes made by the Bush administration were much worse than the personal decisions Bill Clinton had made as a young man.

Perot is retired from public life, and no one knows if he backs Trump or Clinton in this election, but there is no doubt he would agree with Cruz that Americans should vote their conscience this November.