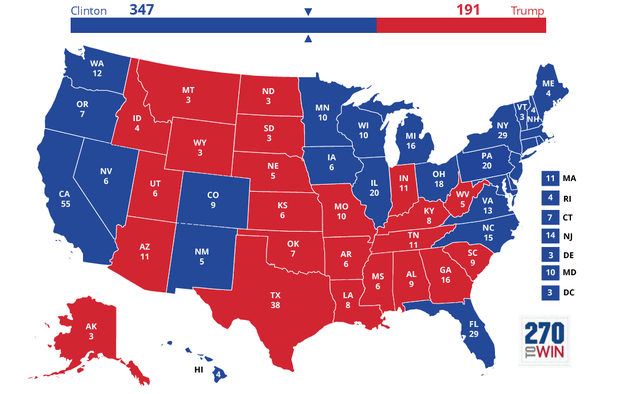 Based on polls from key battleground states this week, Hillary Clinton has solidified her lead over Donald Trump in the electoral college.

Remember, the presidency is not a popular vote contest, it takes 270 electoral votes to win.

If the election were today, this is how we project the electoral map would look: Most significant for Clinton is that her solid blue states — those in dark blue below — give her 273 electoral votes, three more than she needs to win.

Looking deeper at that map: Clinton could lose every single one of the states that are currently leaning her way — Ohio, Florida, North Carolina, Iowa, Nevada — and still win. That’s an impressive place to be with 80 days to go.

This map is virtually unchanged from ten days ago, except Georgia has turned from “leaning Clinton” to “leaning Trump.” Georgia is a state that should already be solidly for the Republican nominee.

For Trump, this map is particularly bad because it shows a state Mitt Romney won four years ago, North Carolina, now leaning toward Clinton. Trump cannot reach 270 unless he builds from Romney’s map and adds other battleground states.

In addition, Trump is barely holding a lead in the traditional Republican states of Arizona, Georgia, Missouri and South Carolina. If he loses those, Clinton will win in a landslide, making likely a Democratic majority in the U.S. Senate.

The Trump campaign, however, does have a “simple” strategy to get back in this. If Trump can get back North Carolina, and flip Florida, Ohio and Pennsylvania from blue to red, he will hit 273 electoral votes and win.

But that’s not as easy as it sounds. Polls have him way down in Pennsylvania, a state that hasn’t gone red since 1988, and he’s also losing by a growing margin in both Florida and North Carolina. Ohio seems his best chance right now, but that won’t be anywhere near enough if he can’t turn the others around.

Note: If Trump hasn’t solidified Arizona, Georgia, Missouri, South Carolina and North Carolina in the next ten days, this could be a long fall ahead for Republicans.