First GOP Congressman To Back Clinton 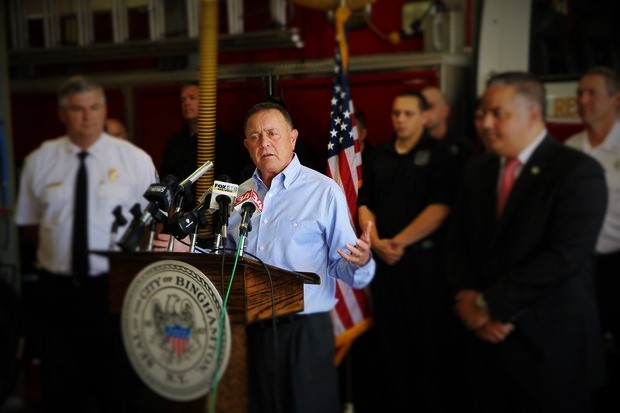 It is quite remarkable really. A growing list of prominent Republicans and conservatives, who have abandoned Donald Trump and joined the pro-Hillary Clinton ranks, now includes the first sitting member of Congress.

“For me, it is not enough to simply denounce Donald Trump’s comments: He is unfit to serve our party and cannot lead this country,” said Hanna. “I found him profoundly offensive and narcissistic but as much as anything, a world-class panderer, anything but a leader. Little more than a changing mirror of those he speaks to.”

“I never expect to agree with whoever is president, but at a minimum the president needs to consistently display those qualities I have preached to my two children: kindness, honesty, dignity, compassion and respect,” said Hanna. “While I disagree with her on many issues, I will vote for Mrs. Clinton. I will be hopeful and resolute in my belief that being a good American who loves his country is far more important than parties or winning and losing. I trust she can lead.”

“I believe Hillary Clinton has the wisdom and experience to lead our country at this critical time,” said Scowcroft. “She brings deep expertise in international affairs, and a sophisticated understanding of the world, essential for the Commander-in-Chief.”

Richard Armitage, the deputy secretary of state under George W. Bush, and the assistant secretary of defense under Ronald Reagan, has endorsed Clinton.

“The GOP, in putting Trump at the top of the ticket, is endorsing a brand of populism rooted in ignorance, prejudice, fear and isolationism,” said Paulson. “This troubles me deeply as a Republican, but it troubles me even more as an American. Enough is enough. It’s time to put country before party and say it together: Never Trump.”

The former Republican mayor of New York City, Michael Bloomberg, has questioned Trump’s sanity and called him a con man.

“Trump says he wants to run the nation like he’s run his business,” said Bloomberg. “God help us. I’m a New Yorker, and I know a con when I see one. Truth be told, the richest thing about Donald Trump is his hypocrisy.”

Marc Raciot, the popular former two-term governor of Montana and chairman of the Republican National Committee during the George W. Bush presidency, said, “Americans can choose better than Trump.”

Jim Cicconi, senior executive vice president at AT&T, who also served in both the Reagan and George H.W. Bush administrations, endorsed Clinton last week saying, “it is vital to put our country’s well being ahead of party.”

Kori Schake, a conservative national security official under Bush, endorsed Clinton saying, “What I think is more likely than a reconciliation with Trump by conservative foreign policy and defense policy experts is a slow, agonizing reconciliation that Hillary Clinton is a safer pair of hands.”

Mark Salter, a former strategist for John McCain, the 2008 GOP nominee, also backs Clinton: “Trump is an awful human being. He appeals to a sliver of the country that mystifies me.”

Doug Elmet, a former Reagan administration staffer and GOP communications consultant, says he has never voted for a Democratic presidential candidate, but this year he is heading “Republicans for Clinton.”

“I don’t believe Donald Trump is a Republican,” said Elmet. “I think Donald Trump is a brand. And he’s managed to hoodwink America into believing he will lead this country through the fire. I think he will thrust us into the fire.”

Mike Treiser, a former staffer on Mitt Romney’s presidential campaign, wrote on Facebook: “In the face of bigotry, hatred, violence, and small-mindedness, this time, I’m with her.”

Conservative columnist George Will said last month a Clinton term is less dangerous for the nation than Trump.

While not endorsing Clinton, former presidents George H. W. Bush and George W. Bush, along with former Florida Governor Jeb Bush, have announced they will not vote for Trump. Mitt Romney, the 2012 GOP nominee, also has said he will not back Trump.

Ohio Governor John Kasich has not endorsed the GOP nominee and skipped the convention in Cleveland last month. Ohio is viewed as critical to Trump’s chances to winning 270 electoral votes.

One thing is certain, while Trump is having difficulty holding Republicans together, there has been no such clamoring from Democrats to leave the Clinton camp and join team Trump.