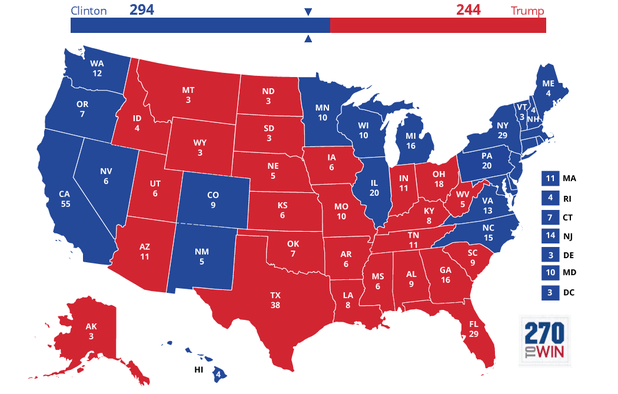 Ten days ago, exactly two months before the November election, we reported that Hillary Clinton maintained a “healthy lead in the electoral college.” But we also pointed out her lead in key battleground states was softening, and if Donald Trump could break through in Florida and Ohio we would have a much different forecast.

And that’s exactly what’s happened in the last ten days.

Here is our latest forecast model with 50 days to go until the election: It is a nose dive for Clinton who just ten days ago dominated the map with 341 electoral votes.

Trump has taken a lead, based on averaging key polls, in both Florida and Ohio. Those two big battleground states alone flipped 47 electoral votes his direction. That is a powerful shift in ten days.

In addition, he’s expanded his lead in both Iowa and Georgia which now appear likely red states. And there’s more bad news for Clinton as her lead in other states like Virginia and Colorado have dropped, although we are keeping them in the “likely” column for now. The good news for Clinton is that her absolute firewall of Pennsylvania remains solid. She is still averaging above a 5 percent lead there, along with Michigan, Wisconsin and New Hampshire. But make no mistake, her once overwhelming lead in those states is gone.

The momentum is in Trump’s direction. Why?

It’s been a rough ten days for Clinton. Illness (and the video showing her ill) kept her off the campaign trail for days. For his part, Trump has managed to stay on script, reading off the teleprompter and trying to appear presidential to college educated white voters in battleground states that he needs to win.

There is a dose of reality for Trump, however, as you can expect Ohio and Florida to swing wildly back and forth after the debates begin next week. And despite his momentum Trump still is having trouble reaching 270 electoral votes.

Look what happens when we add North Carolina and Nevada (where the Clinton lead is down to less than 1 percent) to his tally: Even with North Carolina and Nevada, Trump is still five electoral votes short of victory. That means he still needs to flip Pennsylvania, a state Republicans haven’t carried since 1988. He could consider Michigan or Wisconsin but they are likely to be as stubborn, and he needs to keep an eye on Arizona where he is maintaining a thin lead.

Although it is very possible Clinton can swing the mood of voters back her way, she is in serious trouble if the expected calculated turnout for her is lower among African Americans, Latinos and Hispanics, and young voters under 35. There are polls showing an increasing enthusiasm gap in those demographics.

If five percent or more of the Obama coalition stay home, or vote for a third party candidate, the wildly supportive Trump supporters are likely to flood the polls in battleground states and make him the next leader of the free world.