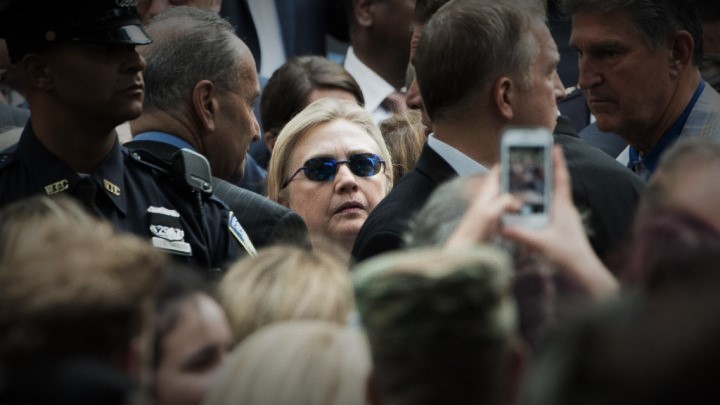 Everyone in the press knows that Hillary Clinton has a transparency problem. It’s nothing new, and goes way back in her career. Truth be told, Clinton hates the press. She holds few press conferences, does few interviews and if there is an option to avoid the press, she’ll do it.

Yesterday is just the latest example. Clinton nearly passed out being lifted into her vehicle, only to be whisked away without the traveling press having any clue where she went.

For ninety minutes, just 57 days before the election, the Democratic nominee for president was MIA. When Clinton reemerged back into public view, she said nothing about having pneumonia or being sick. Instead she and her team quickly huddled behind closed doors and went into overdrive on how they could manipulate her health information and keep it from the media — and voters — as long as possible.

We’d expect that from Richard Nixon in 1972. It’s tough to take from any major candidate in 2016.

The criticism is not just from Republicans or the press, it’s from the man most responsible for helping to elect Barack Obama in 2008 and 2012.

David Axelrod is a top Democratic strategist and a longtime critic of the secrecy surrounding Clinton’s campaigns. This morning he tweeted:

Antibiotics can take care of pneumonia. What’s the cure for an unhealthy penchant for privacy that repeatedly creates unnecessary problems?

The answer to “the cure for an unhealthy penchant for privacy” is, of course, media availability.

The most bizarre thing about Clinton’s demand for secrecy is that had she just said, “I’m on antibiotics for pneumonia and didn’t drink any water this morning” most Americans would have gotten it. We have all been there. Clinton, like a lot of people, hates to drink water and she needs more fluids. That admission — that she’s human — would have helped her far more than hurt her.

As I wrote in my book Front Row Seat at the Circus:

I’ve learned through the years that having a bad relationship with the press creates a self-fulling prophecy for politicians. The more they dislike reporters, the fewer interviews they give. That means less coverage they receive and more coverage for their opponent. And while this cloud of doubt and mistrust is developing, if and when a politician makes a mistake, it is amplified even more because it’s the first voters have heard from them in a long time.

Being accessible and transparent solves this problem.

But it’s not a one day problem, it’s “repeatedly” as Axelrod wrote.

Another close Clinton ally told The Hill: “Why couldn’t the campaign just have been above board about this? She got sick, tell people she’s sick and move on. I know they thought it would give the right wingers something to pounce on but who cares?”

Earlier this year Axelrod also commented on the ongoing drip, drip, drip of Clinton’s emails: “When the exact same problems crop up in separate campaigns, with different staff, at what point do the principals say, “Hey, maybe it’s US?”

So this isn’t a new issue for the Clinton campaign.

To which Axelrod responded:

One thing is certain: Complete health records need to be released by both Clinton and Trump soon. And, while we’re at it, Trump needs to release his tax returns too.

Voters deserve transparency. The press can only do so much unless the candidates feel the pressure.