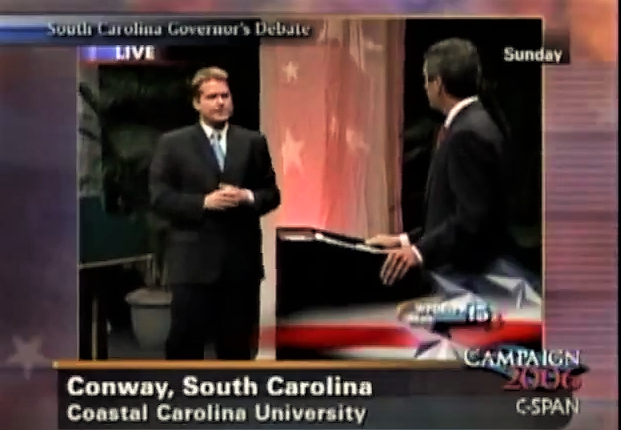 Mark Sanford provided one of my favorite career live television debate moments. As he sought reelection in 2006, I moderated the final gubernatorial debate between the governor and his Democratic challenger Tommy Moore.

A few prominent elected conservatives in South Carolina had expressed their dissatisfaction with him—payback for that maverick style—and they had endorsed Moore, much to Sanford’s obvious annoyance

At the start of the debate, as voters across the state and the nation on C-SPAN, looked on, I left my position behind a lectern and approached Sanford with this question:

“Governor, we’ve seen these 4 x 8 signs all over the state that say ‘Republicans for Tommy Moore.’ There are some Republicans here tonight, some of Horry County’s most popular officials, who support the Democratic nominee. When you look back, what is it with Mark Sanford and your administration and your governing that has angered so many in your own party?”

“Who would they be?” Sanford shot back challenging the question.

“With legislators, state senator Jake Knotts; we can start there,” I responded without hesitation. “We can run through other lawmakers— Horry County Auditor Lois Eargle is in the audience tonight—she’s supporting Tommy Moore.”

At this point I started to back up toward my lectern to grab a sheet that had another dozen names on it. Sanford raised an eyebrow “I can continue on,” I said, “but you would agree there are some?”

“Absolutely, absolutely,” Sanford quietly said and then continued his answer.

The exchange provided an important lesson for journalists. A live debate or interview with politicians is like entering a courtroom. Never flippantly throw out a question without understanding the background, and be prepared to offer more details. Had I been unprepared in this situation, Sanford would have made me look ridiculous in the first minute of a live debate. Instead, I called his bluff and it firmly established who was piloting the debate.

It would have never occurred to me that night that Sanford, after his huge reelection and popularity with voters, would go on several years later to embarrass his family, himself, and all of South Carolina.

For six days in 2009 Sanford went missing, his spokesman claiming he was out hiking the Appalachian Trail. In fact, he was in Buenos Aires, Argentina, with a mistress he had started a relationship with a year earlier while on an “economic development” trip.

With whispers growing about his hiking story, in a bizarre circus-like press conference, Sanford acknowledged the affair, calling his mistress his “soulmate.”

That prompted his wife, the First Lady of South Carolina Jenny Sanford, to leave him and file for divorce. Lawmakers in both parties, never enamored with Sanford, started impeachment proceedings against him. He survived the remaining year of his term as a wounded incumbent—becoming the butt of many national jokes—and all talk of a future presidential bid ended. Remarkably, voters in Charleston returned Sanford to Congress in 2013.

(Incidentally, Sanford and his “soulmate” went their separate ways. I’m not sure if he ever actually hiked the Appalachian Trail.)

From Jim Heath’s book Front Row Seat at the Circus.