Yet another travesty happened on ABC’s Dancing with the Stars Monday night, and it could have been avoided had the rules been the same as they are in the U.K.

“Grocery Store Joe” Amabile, a reality TV personality from The Bachelor, is so bad at dancing that his appearances are mocking the very show that he’s on.

With his reality TV buddy Jordan Kimball, Amabile did some ridiculous moves that made it appear they were at a drunken fraternity party, not a network dance show.

Professional dancer Jenna Johnson did her best with this trio, but it was a disaster from start to finish.

“I kinda feel like I’m back at AFV,” quipped host Tom Bergeron making reference to a show that featured Americans caught on video doing stupid things.

“That was a unique experience,” added judge Bruno Tonioli. “The timing, non existent.”

The routine received 15 of 30 points from the judges, and that was way too kind.

Still, at the end of the broadcast, it was Tinashe, and pro partner Brandon Armstrong, who were sent packing after they performed a tango and earned a 26/30 from judges.

That result shows the severe flaw in the rules of the this show.

Maybe it can be forgiven that Amabile sticks around for a few weeks at the beginning of the season. He’s a good looking and seemingly very nice guy fresh off another reality TV series.

But at some point you’re either airing a dance show, or just a popularity contest where guys can just flop around and their dancing is secondary. 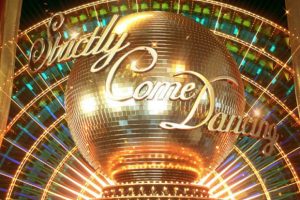 Strictly Come Dancing is aired on the BBC.

Do What The Brits Do

The original version of this show prepared for a popular contestant who would be loved by the fans, but made a mockery of the actual dancing.

ABC’s Dancing with the Stars is actually based on the British TV series Strictly Come Dancing (the BBC production logo is shown at the beginning of each broadcast).

They have an entirely different judging system in place for their show.

Strictly initially scores dancers on a combination of judges’ ratings and the fans vote.

The two couples with the lowest number of points from a combination of judges’ scores and the results of the vote will go into a dance-off at the end of the show.

It’s a pretty dramatic moment, especially when you start getting down to the really good dancing partners, knowing they are dancing for their lives.

After these two unlucky dancers perform once more, the judges — not fans — decide their fate.

That system almost ensures that the “grocery store Joe’s” of the world do not get confused with actual dancers – which is the point of the show.

If this system had been in place Monday night, Joe would have taken his smile home and the much better dancer Tinashe would still be rehearsing.

Producers of the American version of Strictly would be well advised to take a rules change into consideration.

Otherwise, dancing fit for a fraternity party could tragically wind up with the Mirrorball Trophy.