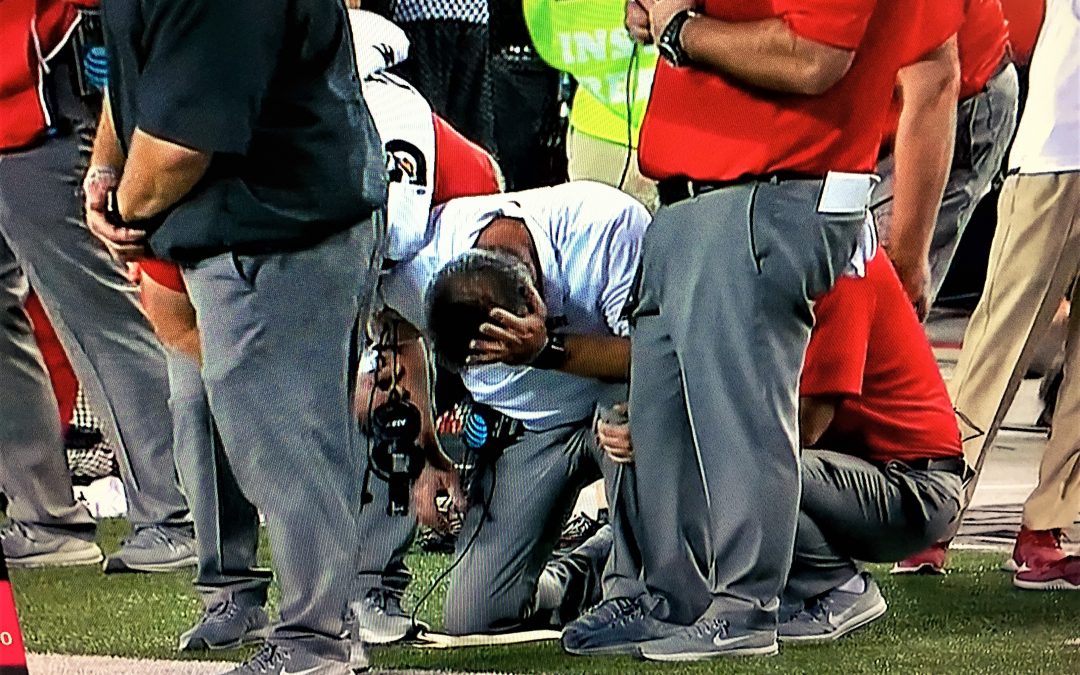 It was quite the image. Ohio State coach Urban Meyer, crumbled to his knees on the sideline, clutching his head in pain.

For most of the month, Meyer has been peppered with questions about his health and future in coaching.

Today he opened up about it in an interview with Yahoo Sports.

He said the cause of the discomfort links back to a congenital arachnoid cyst in his brain, which has led to severe headaches at times in his career.

“Over the last few years, I’ve felt better and, with the help of my doctors, learned to manage it and monitor it with medication,” Meyer said in a phone interview with Yahoo Sports. “I’m optimistic that this time won’t be any different.”

Meyer decided to outline his medical history because of persistent questions about his future as Ohio State’s coach.

Asked yesterday at a press conference to address rumors that this may be his last year coaching, the 54-year-old Meyer said, “I plan on coaching.” Asked if he would definitely return to Ohio State next year, he answered, “Yes.”

Meyer, who is under contract through the 2021 season, missed training camp and the first three games this season over his handling of domestic abuse allegations against now-fired assistant Zach Smith.

Then there was the moment he dropped to his knees in pain on October 6, followed by speculation from experts that he didn’t look well in the loss to Purdue ten days ago.

Ohio State is aware of the image problem this photo, and others like it, have caused this month. 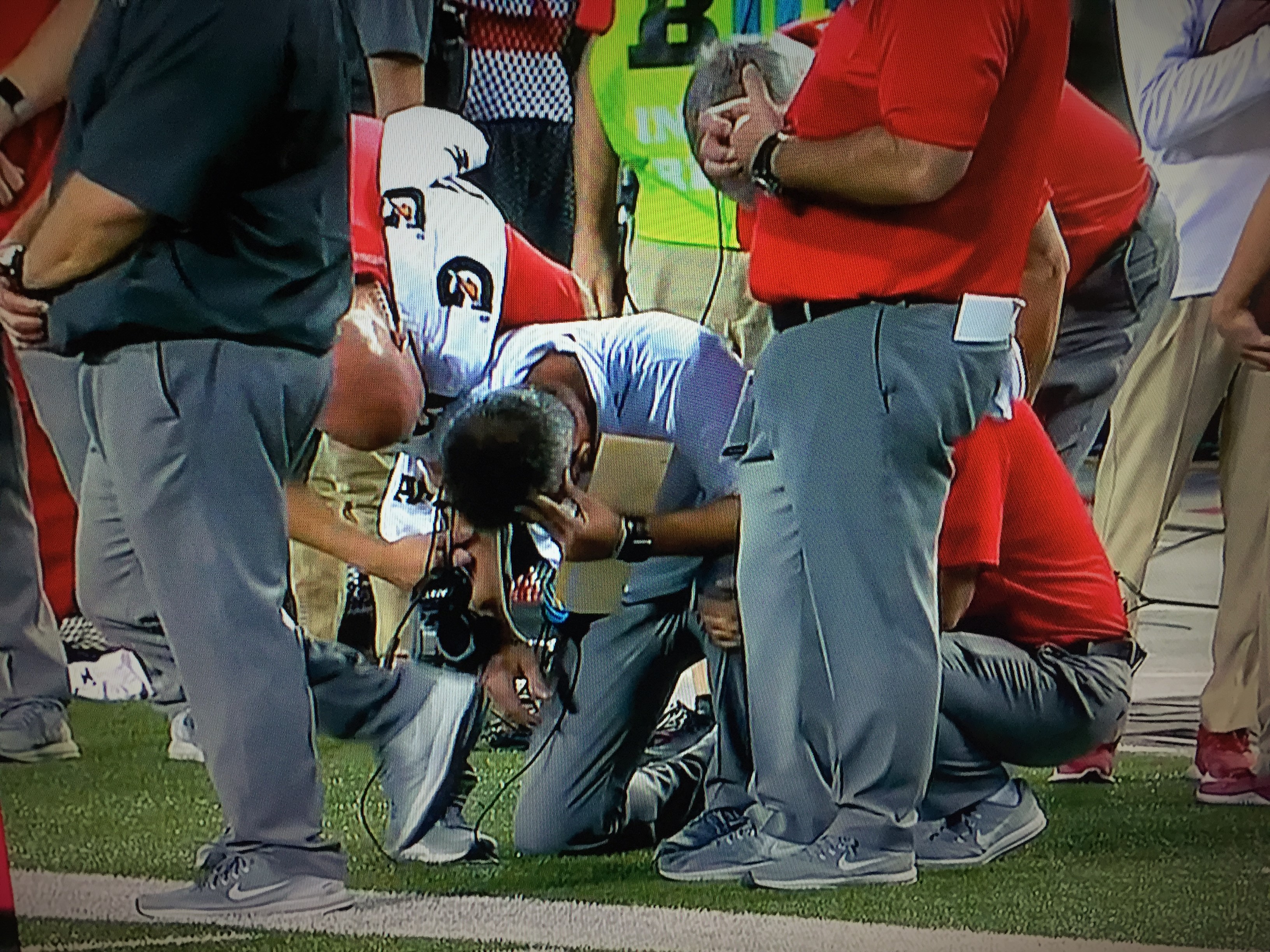 Coach Urban Meyer grabs his head in pain during the Oct. 6 game against Indiana.

“The past four years, we’ve been working closely with coach Meyer to monitor and manage the symptoms that have risen from his enlarged congenital arachnoid cyst,” said Dr. Andrew Thomas, Meyer’s personal physician and the chief clinical officer at Ohio State’s Wexner Medical Center. “This includes aggressive headaches, which have particularly flared up the past two years.”

So what, exactly, is an arachnoid cyst?

“It’s a benign cyst on the membrane tissue that covers the brain,” says Dr. Robert Brodner, a board-certified neurosurgeon at Good Samaritan Medical Center in West Palm Beach. “They occur congenitally in about 5 to 6 percent of the population — with the vast majority being asymptomatic.”

In other words, most people who have one are never even aware of it.

However, sometimes people do suffer symptoms (as was described in Sports Illustrated of Meyer experiencing two episodes of blinding head pain while on the sidelines during games in 1998 and 2003). When that happens, it’s because, says Brodner, “Over time, the cyst can slowly, progressively enlarge as it imbibes spinal fluid. The enlargement can then exert pressure on the part of the brain in closest proximity to the cyst.”

The associated symptoms depend on which part of the brain is being pressured. But, Brodner said, the most common ones are “headaches, nausea, vomiting and gait disturbance.”

“Since his days when he blacked out and nearly fell while on the sidelines as an assistant at Notre Dame, Meyer had tried to learn how to better control his emotions. It turned out to be an arachnoid cyst on his brain, benign, but it also caused severe migraines when aggravated by emotional stress. The doctors told Meyer to “cool it with the screaming and yelling”, which he did until he became a head coach at Utah. During a game against Oregon, in a tense moment or the fourth quarter, he almost passed out. Doctors helped him pinpoint those emotional outbursts – usually, in the fourth quarter – and he began to alter his behavior pattern.”

Meyer had brain surgery in the spring of 2014 after suffering consistent headaches for nearly a month.

The complex surgery removed a subdural fluid collection caused by the cyst to relieve increased intracranial pressure, according to Dr. Thomas.

Meyer reiterated to Yahoo Sports that he has no plans to step down at Ohio State, but wanted to be fully transparent about his health issues to alleviate questions about his future.

“I just want people to know what’s going on,” Meyer said. “I’ve been dealing with this for several years.”

Meyer was diagnosed with the cyst in his brain back in 1998 while an assistant coach at Notre Dame. Throughout his coaching career, he’s been prone to severe headaches.

But the past two seasons, he’s endured what he calls “severe pain” at times.

Through medication and monitoring by his doctors, Meyer has been able to manage this.

But he admits there have been times that he has to manage how intense he can be at practice and during a game.