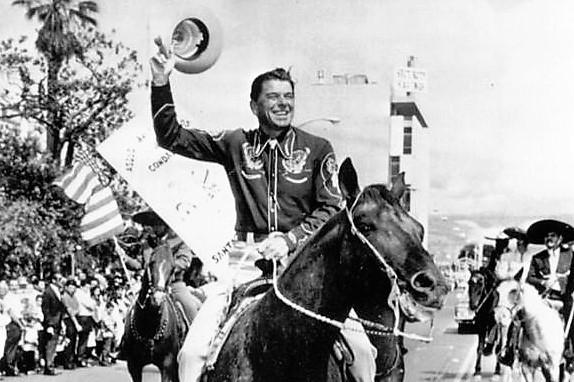 A Republican who spent his political career advocating for an open border with Mexico, and amnesty for those who came to America illegally?  Never, right? But a quick check in the history book shows Ronald Reagan was that man.

The year was 1980, the location was Houston and the question came from the crowd at a presidential primary debate between Ronald Reagan and George H.W. Bush — two bellwether conservatives who would eventually serve together as president and vice president.

“Rather than talking about putting up a fence, why don’t we work out some recognition of our mutual problems, make it possible for them to come here legally with a work permit, and then, while they’re working and earning here, they pay taxes here. And when they want to go back they can go back, and cross. And open the border both ways, by understanding their problems. This is the only safety valve they have right now, with that unemployment, that probably keeps the lid from blowing off…And I think we could have a fine relationship.”

The border, he said, should be open “both ways” — and border security policy should take into account the economic challenges facing Mexico.

Here is the video of Reagan making the above statement:

There is no angry mention of Mexicans being rapists, or any proposal to build a 2,000 mile border wall.

After his huge reelection victory in both the electoral college and popular vote, Reagan signed a massive amnesty bill, called the Simpson–Mazzoli Act, that toughened border security, but offered amnesty to immigrants in the country illegally who entered before 1982.

He proudly talked about the bill during a 1984 debate with Walter Mondale:

“But it is true our borders are out of control. It is also true that this has been a situation on our borders back through a number of administrations. And I supported this bill. I believe in the idea of amnesty for those who have put down roots and who have lived here even though sometime back they may have entered illegally.”

Here is the video of Reagan making the above statement:

Two years later, the Immigration Reform and Control Act also made it illegal, for the first time, for an employer to knowingly hire an undocumented worker.

Reagan’s focus was never the illegal immigrant who was often coming to America to find work, but on the employers of the golf courses, resorts and restaurants who would hire them at low wages and zero benefits.

“There is another employer that we shouldn’t be so concerned about, and these are employers down through the years who have encouraged the illegal entry into this country because they then hire these individuals and hire them at starvation wages and with none of the benefits that we think are normal and natural for workers in our country, and the individuals can’t complain because of their illegal status,” said Reagan.

Reagan was an advocate of legal migration, and of creating legislation that increased border security by air and land through more agents, surveillance and resources.

But a wall or fence was never on the table.

In fact, his most frequent mention of any border wall was the one that ran through Berlin, which Reagan famously encouraged communist leaders to tear down.

In his speeches and statements about U.S. relations with Mexico, Reagan often emphasized the importance of a close friendship with and economic understanding of the United States’s “neighbor” to the south.

“God made Mexico and the United States neighbors, but it is our duty and the duty of generations yet to come to make sure that we remain friends,” Reagan said during a 1981 welcoming ceremony for Mexican President Jose Lopez Portillo. “Our very proximity is an opportunity to demonstrate to the world how two nations, talking together as equals, as partners, as friends, can solve their problems and deepen their mutual respect.”

Work visas? Open borders? Understanding that migrant workers are responding to larger economic forces that play a defining role in where prosperity—or even a steady job—can be found?

Yes. That was Ronald Reagan’s view. 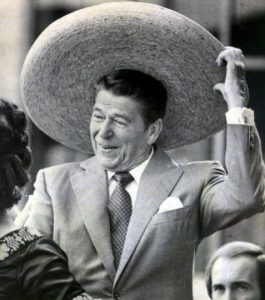 Conservatives through the years have attempted to rewrite Reagan’s position on open borders.

One popular quote circulated online has Reagan purportedly saying, “A nation that cannot control its borders is not a nation.”

The problem is there is no documentation of when or where Reagan made that statement.

In fact, the quote seemingly was made up by biographer Edmond Morris who wrote it in Vanity Fair about an imaginary conversation with Reagan and Teddy Roosevelt.

The reality is Reagan backed open borders and amnesty, but his party has moved away from his position.

Enter Donald Trump, who was a Democrat during the Reagan era.

Even President Ronald Reagan tried for 8 years to build a Border Wall, or Fence, and was unable to do so. Others also have tried. We will get it done, one way or the other!

Trump has flipped the GOP’s position into something Reagan, a former border governor, wouldn’t recognize.

The most striking thing at work here, though, is the tone of Reagan versus Trump.

Reagan did not dabble in fear talk, or claims of an “invasion” coming to kill Americans. There were no dark forces slipping through the border to undermine the American way of life.

Trump, and now the Republican Party, is just the opposite.

Trump’s said Haitians in the United States “all have AIDS.”

The irony is that Trump’s own businesses, and his presidency, have made it clear that low-skilled immigrants are a crucial part of the US economy and even the federal government.

But “build the wall” is a political message that Trump knows plays well with his Pat Buchanan-like base.

Whatever position one takes on immigration, it says a lot about the dramatic transformation of the Republican Party, from Reaganism to Trumpism.

Reagan appreciated that America is a nation of immigrants, but more than that, he understood that the great attraction of immigrants to America was not simply greater economic opportunity but the dream of freedom–the American dream–that the nation represents.

“America represents something universal in the human spirit, said Reagan in 1988. “I received a letter not long ago from a man who said, ‘You can go to Japan to live, but you cannot become Japanese. You can go to France to live and not become a Frenchman. You can go to live in Germany or Turkey, and you won’t become a German or a Turk. But anybody from any corner of the world can come to America to live and become an American.”