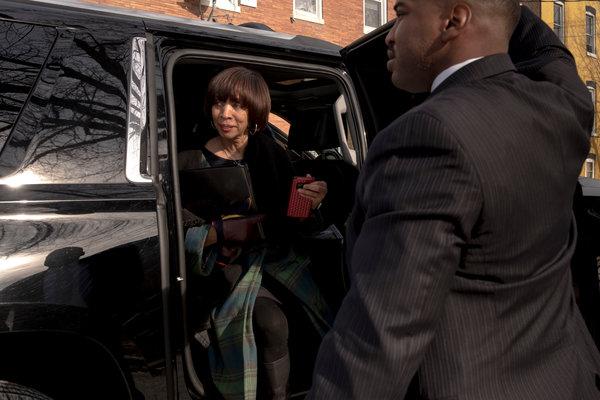 Hours after federal agents searched Baltimore City Hall and homes belonging to Democratic Mayor Catherine Pugh this morning as part of a series of coordinated raids, the governor of Maryland called for the mayor to resign, saying she could no longer govern effectively.

“Mayor Pugh has lost the public trust,” Gov. Larry Hogan, a Republican, said in a statement. “She is clearly not fit to lead.”

Hogan’s demand for Pugh’s resignation comes a little more than two weeks after the Baltimore City Council urged Pugh to step down, and three weeks after Hogan ordered a state investigation into the business relationship between Pugh and a company with extensive financial ties to the city.

The federal authorities did not disclose today what they were looking for in the early morning searches at City Hall and two ofPugh’s homes in Baltimore as well as at the Maryland Center for Adult Training, a nonprofit job training program.

The agents, from the F.B.I. and the Internal Revenue Service, also executed a search warrant at the law office of Steven Silverman, Pugh’s attorney, said an F.B.I. spokesman, Dave Fitz.

Pugh, who has denied wrongdoing, has been embroiled for weeks in a scandal over hundreds of thousands of dollars she received for a series of children’s books she began writing in 2011.

On April 1, Hogan asked state prosecutors to investigate a $500,000 payment that Pugh received from the University of Maryland Medical System, a nonprofit health care company that operates hospitals and other health care facilities in Baltimore and around the state.

The payment was for 100,000 copies of Pugh’s “Healthy Holly” books, which promote healthy children’s eating and exercise.

The books were to be distributed to schools in the city.

At the time of the arrangement, Pugh was a state senator and sat on the nonprofit organization’s board of directors.

She resigned from the board after news of the payments became public in March, apologized for oversights she had made on financial disclosure forms, and returned $100,000.

As embarrassing new details continued to emerge, including that the vast majority of the books involved never reached school children and could not be located, a growing number of elected officials called for her resignation.

Pugh took a leave of absence this month after contracting pneumonia and being hospitalized, but she has said she planned to return once she recovers.

In her absence, the City Council president, Bernard Young, has led the city.