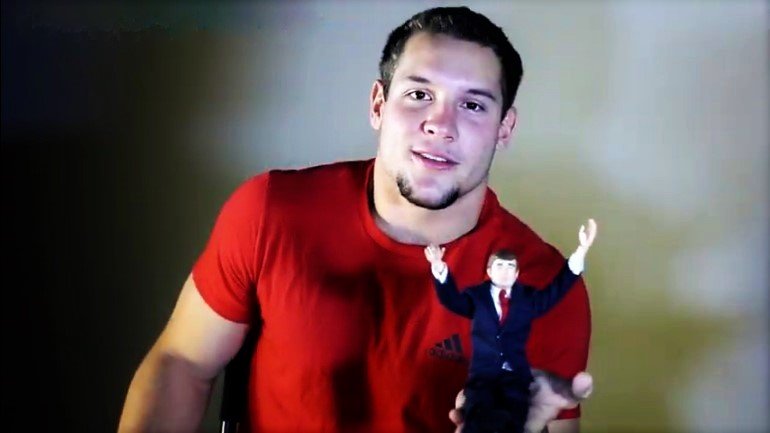 Donald Trump has congratulated the 49ers draft pick Nick Bosa while urging him to ‘always stay true to yourself’ after the rising star apologized for calling former NFL Quarterback Colin Kaepernick a “clown.”

The 21-year-old Ohio State pass rusher was the 49ers’ top pick during the 2019 NFL Draft on Thursday.

Bosa has shown support for Trump in the past (saying he loves him) and has a history of tweeting negative statements about black pop culture icons.

Kaepernick, then the 49ers Quarterback, took a knee during the national anthem to protest police brutality and racial injustice.

He has since been let go by the 49ers organization.

“It was a specific thing that happened and me as a young kid, with a thought popping into my head and, boom, just decided to tweet it out,” said Bosa. “Bad decision. I respect what he’s done. If it empowers anybody, then he’s doing a good thing. I apologize for that.”

He added: “I definitely made some insensitive decisions throughout my life, and I’m just excited to be here with a clean slate.

‘Sorry if I hurt anybody. I definitely didn’t intend for that to be the case.”

The picture that Bosa paints of himself on social media is that of an unapologetic conservative who stands firmly behind Trump.

He has regularly liked tweets filled with homophobia, and white nationalist leanings.

And some of his most critical posts have been directed at high-profile African Americans, including Beyonce, Jay-Z, Dwayne Wade, Kaepernick, and the movie Black Panther: 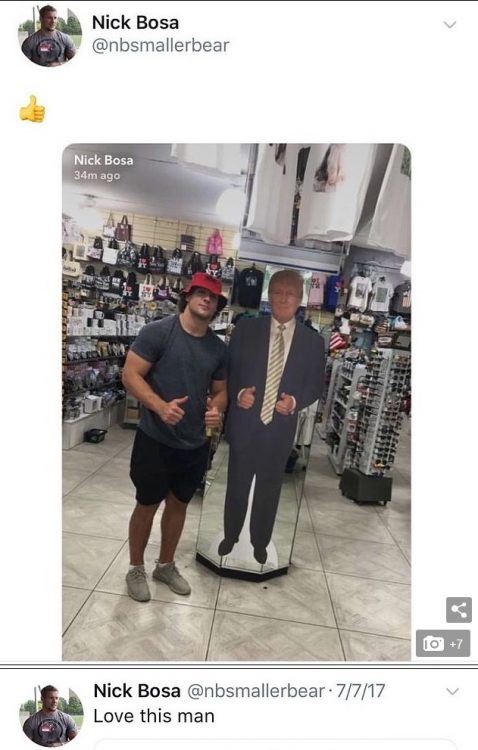 Trump tweeted this morning his support of Bosa:

Congratulations to Nick Bosa on being picked number two in the NFL Draft. You will be a great player for years to come, maybe one of the best. Big Talent! San Francisco will embrace you but most importantly, always stay true to yourself. MAKE AMERICA GREAT AGAIN!

The #1 pick was Kyler Murray, who Trump did not tweet congratulations.

Many 49ers fans reacted with fury this weekend over the team’s decision to draft Bosa, and called out Trump for not mentioning Murray:

Moments Ago Trump congratulated Nick Bosa for being selected #2 in the NFL Draft.

The #1 Pick, AHEAD of Bosa, an African American named Kyler Murray, got NO Mention.

Nick Bosa was the second overall pick, he’s white and a vocal critic of Colin Kaepernick.

Kyler Murray, was the #1 overall pick, he’s black and won the Heisman Trophy.

Which one did the president take time to congratulate? https://t.co/Mpydm9nBo3

Hmmmm, I wonder why Trump likes this Nick Bosa guy so much…

If anyone wonders why Trump chose to congratulate the NUMBER TWO draft pick, let me break it down for you:

From Colin Kaepernick to Nick Bosa in three years. From a racism resistor to a racist troll. Helluva ride, Niners Nation.

The 49ers wanted no parts of two players peacefully protesting against racism and Police-Terrorism.

Bigoted Nick Bosa, who famously derided Colin Kaepernick, was just congratulated by Trump for being drafted #2 despite Kyler Murray, the phenomenal black quarterback being the #1 pick. Racists who technically come in second just hate being in the shadow of transcendent black men.

Please stop defending Nick Bosa. Just say you are choosing to look past the KKK behavior because he is a good football player. Thanks

Nick Bosa, who is a “fan” of Trump and has a history of racist tweets, was drafted by the San Fransisco 49ers, the same team that cut Colin Kaepernick for kneeling. #NFLDraft19 https://t.co/yJ0rlBwqVx

Kyler Murray, the #1 pick, who won the Heisman Trophy… is black.

Colin Kaepernick was permanently blacklisted by the NFL for championing civil rights.

Just say it — you singled out Nick Bosa because he sleeps in a MAGA cap, and is an open racist who publicly criticized high-profile blacks, including Beyonce, Jay-Z, Draymond Green and Colin Kaepernick. @49ers lost a hero, and gained a zero. https://t.co/Lc8ioIq3fF