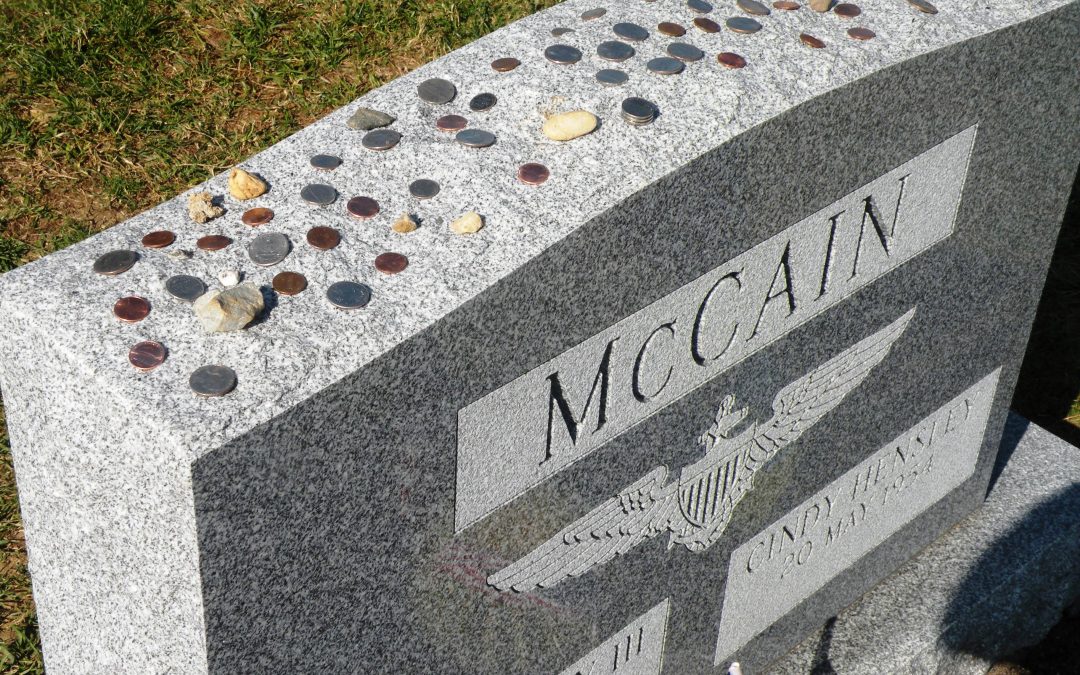 It’s springtime in Washington, D.C., and there are a growing number of coins being left on the grave of the late Sen. John McCain.

McCain’s grave is located on the campus, along Maryland’s Severn River.

During the Vietnam War, he narrowly escaped death in the 1967 USS Forrestal fire.

On his twenty-third bombing mission during Operation Rolling Thunder in Vietnam, in October 1967, he was shot down over Hanoi and badly injured.

He was a prisoner of war from 1967-1971, in North Vietnam, suffering years of torture during his imprisonment.

Following his death last August, coins started appearing on the top of his headstone.

Members of the military sometimes leave special remembrances at the graves of deceased servicemen: challenge coins.

These tokens identify their bearers as members of particular units and are prized and cherished by those to whom they have been given; thus any challenge coins found at gravesites were almost certainly left there by comrades-in-arms of the deceased.

But many different coins can be left on a military headstone, which lets the deceased soldier’s family know that somebody stopped by to pay their respect.

Typically, coins collected each Memorial Day are used for the cost of burial for soldiers, or the care for indigent soldiers.

Supposedly the tradition became popular here in the United States during the Vietnam war – the era when McCain served.

It is believed it was a way to show respect without getting into an uncomfortable political discussion about a war that was very controversial.

In general, however, this tradition can be traced to as far back as the Roman Empire, where it was a way to give a fallen colleague some spending money for the hereafter. 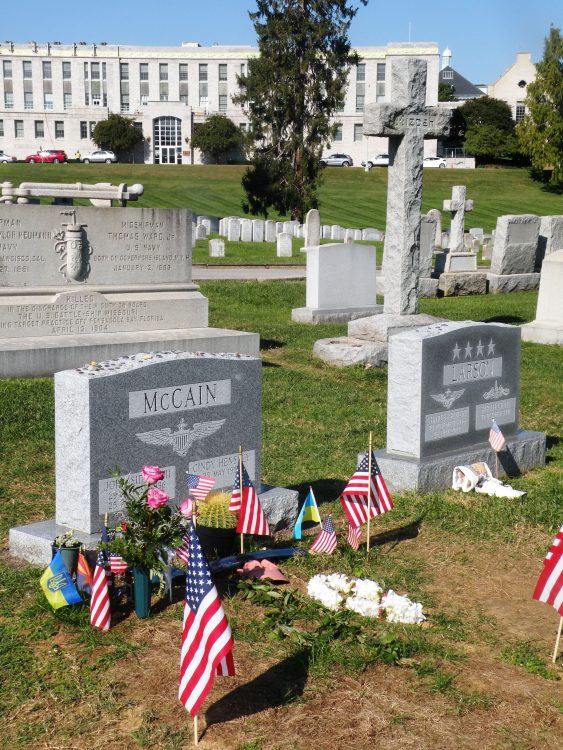 The gravesite of Sen. John McCain in Annapolis, Maryland.

McCain’s headstone features his last name in the center above an engraving of the Naval Aviator emblem.

His name, date of birth and death are visible on the left hand side.

Cindy McCain’s name and date of birth can be seen on the right.

In addition to the coins, the gravesite is decorated with small American flags, an Arizona flag, a seasoning shaker, two potted cacti and flowers.

The gravestone of longtime friend and fellow Admiral Church Larson can be seen to the right of McCain’s headstone.

McCain chose to forego the traditional burial at Arlington National Cemetery to be buried next to Larson, who died in 2014.

McCain wrote in his memoir that he would “take my leave bound for a place near my old friend Chuck Larson, in the cemetery on the Severn (River), back where it began.”

McCain described the grave site as “a beautiful spot” that is “near where our paths first crossed.”

McCain, an American hero, died last August at age 81 after a 13-month fight with an aggressive form of brain cancer.