ELECTION 2020: Sizzling Economy Should Guarantee Trump’s Reelection – If It Weren’t For Trump 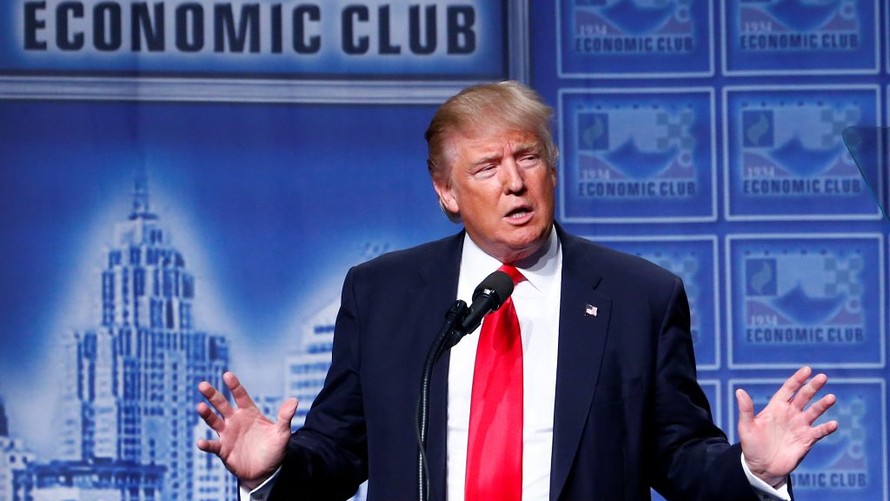 The U.S. economy is defying dire predictions of a slowdown this year with growth strengthening, wages rising, unemployment falling and markets rocking to new highs. It should be an incumbent president’s dream and a nightmare for those trying to replace him.

A divisive politician who loves the success of dividing a lot more than unifying.

Despite occasional efforts to change the subject and boast about the economy, he can’t escape going off script and engaging in almost daily bullying on Twitter.

Congressional Democrats keep peppering his administration with subpoenas and chattering about impeachment.

“The economy is an important issue for him because it’s the one issue that allows him to break out of his base,” said Brendan Buck, who served as a top aide to former House Speaker Paul Ryan. “And there aren’t a lot of those for him. He’s got solid support in the upper 30s and lower 40s but you have to have something to push you over the top. And if the economy isn’t it for him, I don’t know what is.”

For now, Trump is getting win after win on the economic front.

The S&P 500 and Nasdaq stock indices hit new records this week after tanking hard last December on fears of an imminent global slowdown.

And an expected 2019 slowdown has not materialized, with the first read of first-quarter growth released today showing the economy expanded at a strong 3.2 percent rate in the first three months of the year, much better than expected for a period marked by an ugly government shutdown.

Some risks remain just over the horizon: The threat of a real slowdown later this year or next still lurks as heavy fiscal stimulus from Washington fades, oil prices climb and the president continues to threaten harsh moves on trade.

Should an economic fade happen, Trump’s best ticket to reelection could vanish.

“If you are someone who works in politics, you are going to want to scream about the top line on first-quarter growth and privately worry that it may not look so good when the next quarter comes around,” said Joseph Brusuelas, chief economist at RSM US.

The resilience so far means Trump may be losing the bogeyman he blamed last year as markets tumbled: the Federal Reserve.

After taking a brutal verbal beating from Trump for steadily raising interest rates in 2018 in a growing economy, the central bank has paused that campaign to monitor slowing global growth and all but declared an end to rate hikes, helping spark the current market rally.

Without a scapegoat for any economic slowdown, it’s fully Trump’s economy now.

And what happens from here until Election Day 2020 will reflect on him, no matter what he says about Fed Chair Jerome Powell.

“When it comes to voters looking at their presidential choice through the lens of the economy, it does become very centered on the president and his performance,” said Kevin Madden, who served as a top aide to GOP nominee Mitt Romney in 2012. “They don’t really get into complicated issues of whether the Fed did something on interest rates.”

GOP pollster Glen Bolger, who founded Public Opinion Strategies, said bashing the Fed would not likely be a successful strategy for Trump should the economy falter.

“I haven’t really seen it resonate much. I don’t know that voters know a whole lot about what the Federal Reserve does,” he said. “If the economy does have a downturn, voters aren’t going to be that discerning. They’re going to say, ‘You’re in charge. It’s your fault.’”

By pausing its rate-hiking campaign and signaling it would stop reducing the size of its balance sheet, the Fed has largely insulated itself from blame.

At the White House on Wednesday, Trump began remarks to reporters with boasts about the economy.

“So the stock market and our country, from an economic standpoint, is doing the best probably it’s ever done,” he said. “We’re hitting new highs again. We’ve hit new highs, I guess close to, or over 100 times since I’m president.”

Republicans across Washington and in corporate America are imploring Trump to move away from his bitter Twitter tirades and public complaints about the Mueller report and focus on the economy.

But so far he’s shown little desire or ability to do so.

“Trump has an incredible ability to focus attention and if it’s used for good, he could easily set the conversation to, ‘Are you feeling better than you were?’” said Buck. “But to get that kind of message to break through you have to be relentless and disciplined.”

Republicans also worry that Trump could still make disruptive moves that could reignite fears of a sharper slowdown including pulling the U.S. out of NAFTA if his own deal doesn’t get through Congress or by imposing sharp tariffs in the automobile sector, something he’s long threatened.

The economy is already vulnerable to a sharp drop in federal spending and possible expiration of some of the 2018 tax cuts.

And renewed trade wars could push growth down even more.

“You will have fiscal stimulus effects fading in 2019 contributing to an overall deceleration of growth,” said Tiffany Wilding, U.S. economist for investment giant PIMCO. “And the broader issues of continued business uncertainty around longer-run investment plans based on these lingering threats on NAFTA and on tariffs on European autos, that’s certainly still there.”

Even if the economic worriers are proven wrong and growth stays close to 3 percent in 2019 and 2020, Trump will still face a challenging reelection, given his low popularity during a time of solid growth and low unemployment.

“We’ve had a roaring economy and he has an approval rating that hovers around 43-45 percent. Typically with this strong of an economy you’d see a president with a higher approval rating,” said Bolger. “What this is showing is the economy is not necessarily the top dog like it is in lots of other administrations.”