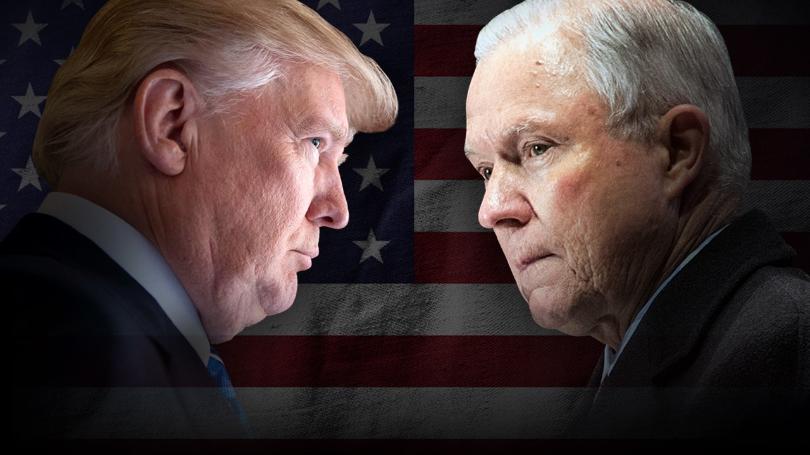 President Trump called former Attorney General Jeff Sessions at home in the middle of 2017 and ordered him to prosecute his former political rival Hillary Clinton.

For any other president in American history, this fact alone would have probably led to impeachment hearings.

“The ‘gist’ of the conversation,” according to the report by the special counsel, Robert Mueller, quoting Sessions, “was that the president wanted Sessions to unrecuse from ‘all of it.’”

Mueller’s report released last week brimmed with examples of Trump seeking to protect himself from the Russia investigation.

But his request of Sessions — and two similar ones detailed in the report — stands apart because it shows Trump trying to wield the power of law enforcement to target a political rival, a step that no president since Richard Nixon is known to have taken.

And at the time Trump pressured Sessions, the president was already under investigation for potentially obstructing justice and knew that his top aides and cabinet members were being interviewed in that inquiry.

Trump wanted Clinton investigated for her use of a private email server to conduct government business while secretary of state, the report said, even though investigators had examined her conduct and declined to bring charges in a case closed in 2016.

No evidence has emerged that Sessions ever ordered the case reopened.

Like many of Trump’s aides, as laid out in the report and other accounts, Sessions instead declined to act, preventing Trump from crossing a line that might have imperiled his presidency.

Instead, Sessions asked a Justice Department official in November 2017 to review claims by the president and his allies about Clinton and the F.B.I.’s handling of the investigation into ties between Trump’s campaign and Russia.

The department’s inspector general had already been scrutinizing the issues and painted a harsh portrait of the bureau in a report last year but found no evidence that politics had influenced the decision not to prosecute Clinton.

It was unclear what effect the disclosures about Trump’s discussions with Sessions could have on the president as House Democrats consider whether to move forward with impeachment proceedings.

Prosecutors, defense lawyers and legal experts largely agree that in the justice system, it is worse for innocent people to be prosecuted and jailed — thus deprived of their freedom — than for a guilty person to go free.

The report gave a detailed account of Trump’s bids to wield power.

Nine months into office in October 2017, he reminded Sessions in a private meeting that he believed the Justice Department was failing to investigate people who truly deserved scrutiny and mentioned Clinton’s emails.

Two days later, Trump repeated his desires publicly, accusing law enforcement officials in a pair of tweets of “a fix” in the Clinton inquiry and asking, “Where is Justice Dept?”

A month later, Sessions found a way to satisfy Trump’s demands without opening a new investigation into Clinton.

He told Congress that he had asked the United States attorney in Utah, John Huber, to examine the allegations Trump and his allies made about Clinton and the F.B.I.

No charges have arisen from that examination, which is continuing.

He pulled Sessions aside after a cabinet meeting in December 2017 and “again suggested that Sessions could ‘unrecuse,’” according to the report.

A White House aide who witnessed the encounter believed Trump was talking about the since-closed Clinton investigation and the open Russia inquiry.

“I don’t know if you could unrecuse yourself,” Trump told Sessions, according to notes taken by the aide, Rob Porter. “You’d be a hero. Not telling you to do anything.”

By trying to have Clinton prosecuted, Trump was following through on a campaign promise.

At rallies, he often stood on stage denouncing her as crowds chanted, “Lock her up!”

Beyond Mueller’s report, there is evidence that Trump has continued to try to push the Justice Department to bend to his wishes.

He told the White House counsel Donald McGahn in April 2018 that he wanted the Justice Department to prosecute Clinton and the former F.B.I. director James Comey, two people familiar with the conversation have said.