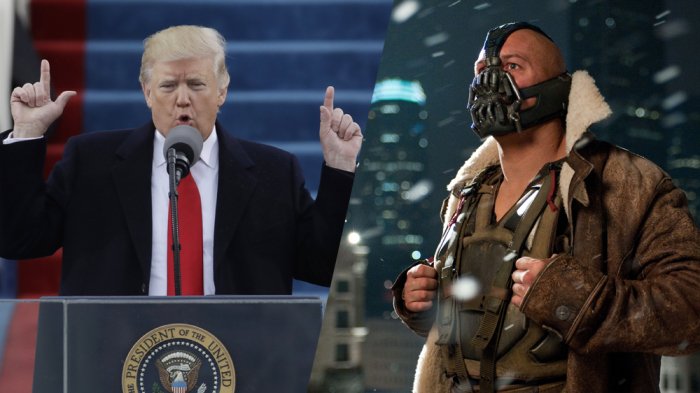 Warner Bros. Pictures is filing a copyright infringement complaint as part of an effort to have a video President Trump shared taken down.

The studio is taking the step because Trump used the instrumental track from the studio’s 2012 film, “The Dark Knight Rises,” when he posted a move-style trailer on Twitter today, Warner Bros. has confirmed.

The clip, which closes with an image of a Trump campaign logo and “2020,” features numerous figures who have repeatedly criticized the president, including former President Obama, Hillary Clinton, former President Bill Clinton, comedians Amy Schumer and Rosie O’Donnell, and actor Bryan Cranston.

The video later transitions to clips of Trump’s time in the White House, campaign rallies and his meetings with foreign leaders.

Social media users couldn’t help but ponder why, of all films to parody, his marketing team would choose recognizable music from a film in which a villain essentially holds the entire city of Gotham hostage as it descends into chaos.

It’s also unclear if Trump is meant to represent Bane or Batman, both of which categorically operate in full defiance of authorities.

How dare you use the dark Knight rises theme. You’re definatly more of a batman and Robin president. pic.twitter.com/iblcr80Uni

Trump’s using @HansZimmer‘s Batman music over one of his propaganda videos. pic.twitter.com/yyuQlrs2OJ

Is that the theme song to The Dark Knight? Batman does not approve pic.twitter.com/TXAuUBTfMR

…wait, did they use the actual DARK KNIGHT music? https://t.co/yl0yqFiW3d

Trump’s using Hans Zimmer’s Batman music over one of his stupid videos. pic.twitter.com/w0OQOSy5sg

The music in Trump latest propaganda video is from Hans Zimmer’s score for The Dark Knight Rises. Warner Bros. is filing a copyright infringement complaint to have the video taken down. ???#Maddow https://t.co/CNUdt8O9u2

And to top it off, Babyfingers and his equally moronic production people didn’t get permission from Warner Brothers to rip off the score from Dark Knight Rises…

…and now they’re being hit with a copyright infringement notice.

The video appears to be lifted from a YouTube video posted to a Reddit thread on /r/The_Donald.

The video by MateyProductions cites Zimmer’s score, but it’s unclear if permission to use it was obtained.