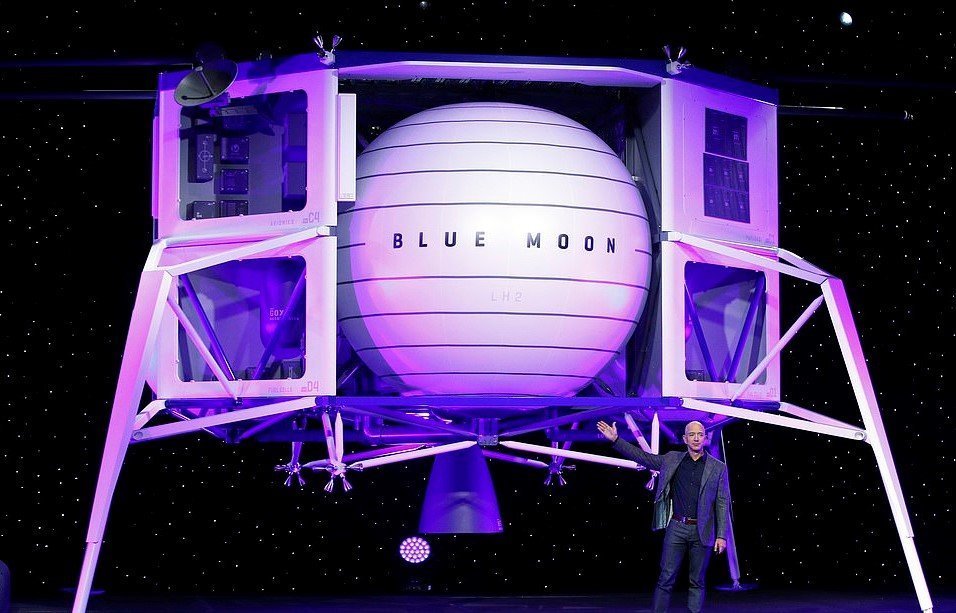 In the six weeks since Vice President Pence announced a crash program to get humans to the moon within five years, the White House has provided no details on how it would achieve that and no cost estimates.

The rocket NASA wants to use to get there has suffered years of delays and is billions over budget, and NASA lacks the space suits necessary for astronauts to walk on the moon.

But the growing space industry has sensed an opportunity in the White House’s passion for space, and today, Jeff Bezos made his pitch to join the effort.

Bezos revealed the ambitious next steps for his aerospace company at a highly-secretive media event in Washington, D.C. today.

Bezos lauded the White House’s goal of getting humans to the lunar surface quickly.

“I love this,” he said. “It’s the right thing to do. For those of you doing the arithmetic at home, that’s 2024. And we can help meet that timeline, but only because we started three years ago. It’s time to go back to the moon — this time to stay.”

During the event, the billionaire and Blue Origin founder shared elaborate concept images of self-sustaining space habitats reminiscent of the film Interstellar, with lush greenery and futuristic homes within its walls. 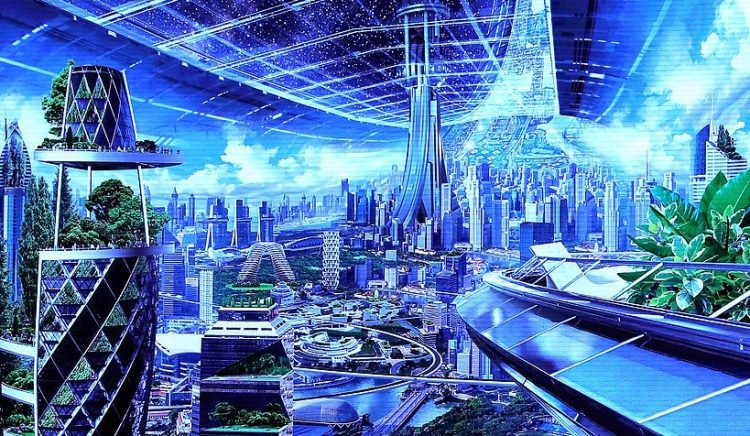 The concept of a future colony on the moon.

But, the real star of the talk turned out to be something much closer to home – the moon.

On stage, Bezos took the wraps off a massive model of what will be the firm’s first lunar lander, dubbed Blue Moon.

It would ferry cargo and supplies to the surface of the moon in advance of a human landing. 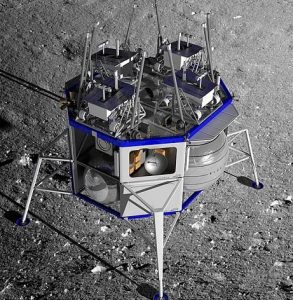 Bezos did not say what the lander would cost or when it would be ready to fly.

According to the CEO, the lander has been in development for the last three years and is on track for a 2024 crewed moon landing – falling in line with the five-year deadline revealed earlier this year by Pence.

The plan could ultimately serve as a stepping stone for colonization of the moon and deeper space targets, Bezos suggested.

Blue Origin says its lunar lander will be able to carry all sorts of payloads to the surface and can hold ‘multiple metric tons.’

The craft will enable a sustained human presence on the moon, and according to Bezos the company already has about six customers.

The lander builds upon technology the firm has been testing over the past few years in its New Shepard rocket, including propulsion and precision guidance, as well as the vertical landing system. The firm has quietly been developing Blue Moon for years.

The system, called BE-7, has been in the works for three years.

Blue Origin says it could conduct the first test fire as soon as this summer.

Bezos also delved into his visions for human colonization of the moon and eventually, deep space, touching on the concept of self-sustaining ‘O’Neill colonies’ exponentially larger than the International Space Station where humans and animals could live.

Considering the possibility of a future that relies on strict rationing, he suggests we must look toward space in order to continue thriving.

Bezos is an acolyte of the late futurist and Princeton University physics professor Gerard O’Neill, whose vision was to build massive colonies in space that could house thousands of people at once in conditions similar to those on Earth — but better.

“These are really pleasant places to live,” Bezos said, showing a rendering. “This is Maui on its best day all year long. No rain. No storms. No earthquakes.”

Blue Origin also shared a copy of the ‘Earthrise’ photo taken by NASA astronauts during the Apollo 8 mission, in addition to the image of Endurance it tweeted out.

Several Blue Origin fans were quick to point out that the image of Endurance may be an obscure reference to a future lunar mission.

As it turns out, they were correct.

A crater located on the south pole of the moon, called Shackleton, was named after the famed explorer, suggesting that Bezos may have some lunar-related announcements up his sleeve.

The Shackleton crater is located in the expansive South Pole-Aitken Basin, one of the largest known impact craters in the solar system, that spans 1,600 miles and is approximately eight miles deep.

Scientists have long had their eye on the Aitken Basin, as they believe it could hold a bounty of life-sustaining resources.

NASA hopes to conduct a mission to the moon’s south pole as soon as 2024, while China’s Chang’e 6 lander aims to explore the lunar south pole.

Many scientists are eyeing this area of the moon as they believe it could be host to huge sheets of ice that could be mined for drinking water or converted into hydrogen and oxygen for rocket fuel or oxygen to breathe.