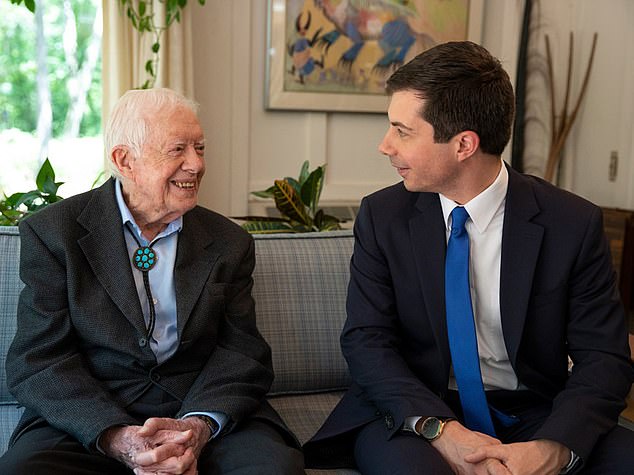 Mayor Pete Buttigieg and his husband, Chasten, visited Jimmy Carter’s Sunday school class in Plains, Georgia, today, and then had lunch with the former president.

At Carter’s invitation Buttigieg stood and read from the Bible as part of the lesson at Maranatha Baptist Church in Plains.

‘You know him?’ Carter had said earlier in reference to Buttigieg, drawing a laugh from the crowd.

Carter told the audience that two other Democratic presidential candidates, Sens. Cory Booker of New Jersey and Amy Klobuchar of Minnesota, had previously attended his classes.

I was humbled to meet with President Carter in Plains, Georgia today. He is a true public servant and America is blessed for his continuing leadership. pic.twitter.com/LaITTSYb0A

The Buttigieg campaign said in a statement that he had lunch with Carter and his wife, Rosalynn, and ‘enjoyed a conversation about topics ranging from faith to the rigors of the campaign trail.’

Scores of people arrived before dawn for a chance to hear Carter, 94, speak.

Entering when most people already were seated, Buttigieg’s unannounced visit elicited a murmur from the crowd.

‘Who’s that?’ asked a man seated in the back of the room.

‘Mayor Pete, the guy running for president,’ a woman answered.

Carter said he knew Buttigieg from working on a Habitat for Humanity project in Indiana where the mayor volunteered.

Many in the class greeted Buttigieg and took photos with him before Carter arrived in the sanctuary and took a seat in the front to teach.

Carter, a former governor of Georgia, shocked everyone in 1976 when he came out of nowhere to win the Iowa Democratic Caucus.

He would go on to receive the Democratic nomination for president and defeat incumbent Gerald Ford that November.