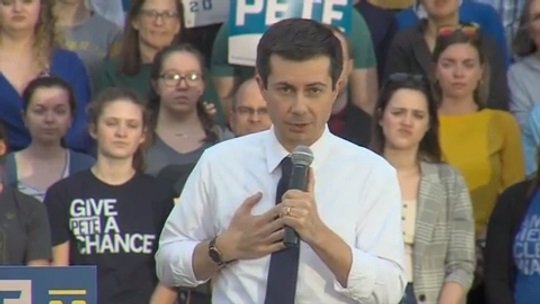 The South Bend, Ind., mayor, who is the first openly gay man to run for President, was speaking at the Dallas County Democratic Party’s Johnson Jordan Dinner when he was interrupted several times by protesters, at least some of whom shouted anti-gay messages.

“Marriage is between a man and a woman,” one yelled.

“Repent,” another yelled, according to a video posted to Twitter by CNN reporter DJ Judd.

Buttigieg reportedly carried on through the interruption, noting that he served in Afghanistan “to defend that man’s freedom of speech.”

Pete Buttigieg has been interrupted four times here in Dallas by protesters. One yelled “Marriage is between a man and a woman!” Another yelled “Repent!” After the 4th, Buttigieg continued, “The moment I packed my bags for Afghanistan, to defend that man’s freedom of speech…” pic.twitter.com/zIpDSCIrti

A woman, who event staff said did not have a ticket, was also escorted out of the venue after crying out anti-abortion comments.

Buttigieg at one point deadpanned that it was a “lively room” and later added that he was “just thinking of that scripture that says bless and do not curse.”

Buttigieg lkmarried his husband, Chasten, in 2018.

He has faced public and personal attacks for his sexuality on the campaign trail, including an incident last month in which he was confronted by two protesters in Iowa shouting biblical references.

The protesters shouted about the biblical cities of Sodom and Gomorrah, which the Bible says were destroyed by what it calls sinful acts, including sodomy.

“The good news is the condition of my soul is in the hands of God, but the Iowa caucuses are up to you,” Buttigieg responded in stride as the protesters were ushered away. “Remember the beauty of our democracy. Everyone here gets the exact same voice and vote. Feels like the numbers are on our side,” he added.

Another 2020 candidate, former Rep. Beto O’Rourke (D-Texas), apologized to his competitor for the incident on Twitter:

Texans don’t stand for this kind of homophobia and hatred. Mayor Pete, we are grateful you came to Texas and hope to see you and Chasten back again soon. https://t.co/IhRDtIBREb

Buttigieg told TIME earlier this year that his observation of homophobic behavior has convinced him that people can change and earn forgiveness.

“This idea that we just sort people into baskets of good and evil ignores the central fact of human existence, which is that each of us is a basket of good and evil,” said Buttigieg, “The job of politics is to summon the good and beat back the evil.”