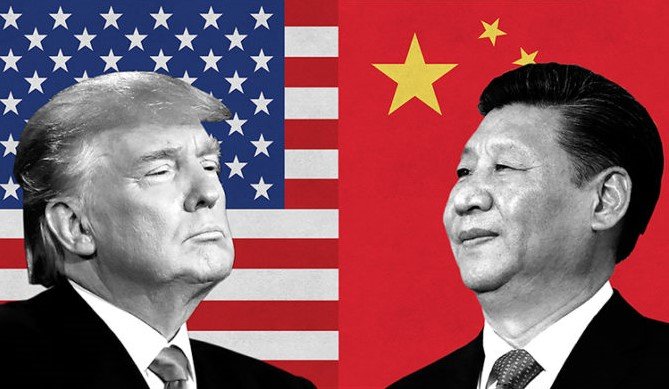 President Trump’s efforts to calm investors while he launches a full-scale trade war with China showed signs of cracking today, as one of his top advisers admitted the approach could damage the U.S. economy, a Goldman Sachs report predicted it might lead to higher interest rates, and China vowed to impose tariffs on $60 billion in U.S. goods on June 1.

China’s response, announced by its Ministry of Finance, said it targeted “U.S. unilateralism and trade protectionism.”

The Dow Jones industrial average and the Standard & Poor’s 500 index both plunged in morning trading.

While many business executives and investors had hoped that tensions between the United States and China would be resolved easily, the recent developments show how much each country is digging in for a long fight.

“Over the past week, hopes for at least a partial and temporary cease-fire between the two sides have given way to the prospect of a rapidly escalating and broadening economic conflict between the two countries,” said Eswar Prasad, senior professor of trade policy at Cornell University.

Amid signs that investors were questioning his adversarial approach, Trump attempted to assuage the public in a series of Twitter posts.

But some of his tweets contained typos and misspellings, suggesting that his comments had not been thoroughly vetted by White House officials and might not represent fully planned-out policy initiatives.

The dramatic escalation came last week after Trump imposed a 25 percent tariff on $200 billion of Chinese imports to the United States.

He also told aides to begin plans to hit more than $300 billion in other Chinese goods.

Trump has alleged that the Chinese government is ripping off American consumers and businesses by unfairly subsidizing Chinese companies, stealing intellectual property from U.S. firms and flooding global markets with cheap goods to put other companies out of business.

Today, he warned China against retaliation in a series of early-morning tweets.

But China showed it planned to counter his adversarial approach with its own penalties against U.S. companies.

The Chinese government said it would impose tariffs on U.S. imports starting on June 1, with the steepest penalties hitting textile products, certain kinds of beef and coffee, and technology such as microwave ovens, printers and solar batteries.

The tariffs would range from 5 percent to 25 percent.

Chinese Foreign Ministry spokesman Geng Shuang said today that Beijing did not believe raising tariffs would solve “any problems,” but he warned that China would be ready to defend itself.

“China will never succumb to foreign pressure,” he said. “We are determined and capable of safeguarding our legitimate rights and interests. We still hope that the U.S. will meet us half way.”

U.S. agriculture companies could be hit hard by the new penalties, which would make their products more expensive for Chinese buyers.

U.S. farm groups have already complained to the White House that they have been caught in the middle of Trump’s trade skirmish and that the president had pledged to assist them.

Trump has said he would seek an additional $15 billion in U.S. taxpayer money to aid farmers.

Trump has suggested that the impact of the tariffs on U.S. consumers could be mitigated by simply buying American-made products or those manufactured in countries not subject to the tax.

He also claimed that the tariffs would drive business away from China and warned that the situation “will only get worse” if a deal is not reached.

“Their [sic] is no reason for the U.S. consumer to pay the Tariffs, which take effect on China today,” Trump tweeted. “Also, the Tariffs can be completely avoided if you by [sic] from a non-Tariffed country, or you buy the product inside the USA (the best idea.)”

Trump’s comments about the effects of the tariffs clashed with those of National Economic Council Director Larry Kudlow, who acknowledged that Americans will pay the price in an interview on “Fox News Sunday.”

“It’s not China that pays tariffs,” host Chris Wallace said. “It’s the American importers, the American companies that pay what, in effect, is a tax increase and oftentimes passes it on to U.S. consumers.”

After a tweet from an editor of the Global Times, a Chinese state-affiliated media outlet, suggested that China might cease purchases of U.S. agricultural products and reduce Boeing orders, the embattled aircraft manufacturing company signaled optimism in a statement Monday to CNBC.

“We’re confident the US and China will continue trade discussions and come to an agreement than benefits both US and Chinese manufacturers and consumers,” Boeing said.