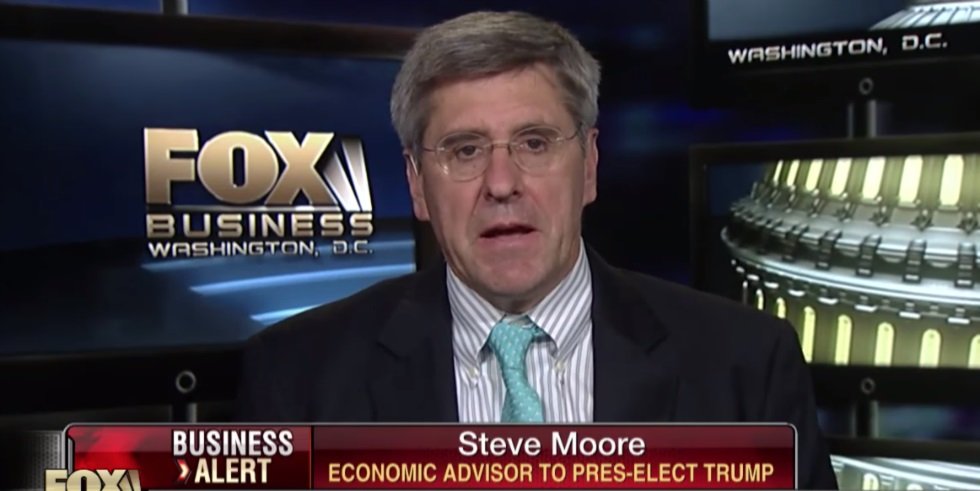 President Trump’s selection for the Federal Reserve Board of Governors, Stephen Moore, pulled out of consideration for the job hours after he said he was “all in” for the central bank.

Trump said on Twitter today that Moore had decided to withdraw following an appearance on cable news.

“My biggest ally is the president,” Moore said in the interview this morning. “He’s full speed ahead.”

Trump then tweeted that he was out.

Moore was described by some critics as a threat to the Fed.

In addition to being an unpredictable commentator and unorthodox economic thinker, Moore struck some economists as a partisan pick who might inject a short-term political agenda into monetary policy deliberations, which central bank independence is designed to guard against.

Just this week he was on a conservative talk show explaining his 2016 joke about Donald Trump moving into the White House and kicking “a black family out of public housing.”

“That is a joke I always made, like a black person (Obama) lived there,” said Moore. “I shouldn’t have said it.”

In a statement after Trump’s tweet, Moore said he was withdrawing because “unrelenting attacks on my character have become untenable for me and my family and 3 more months of this would be too hard on us. ” He said he’d continue to be a “loud economic voice” advocating Trump’s policies.

Before Trump named him for the Fed board, the White House was considering Moore to be Vice President Mike Pence’s chief economist.

The White House has yet to announce new candidates.

Possibilities include Judy Shelton, a conservative economist, and Craig Phillips, a counselor at the Treasury Department.