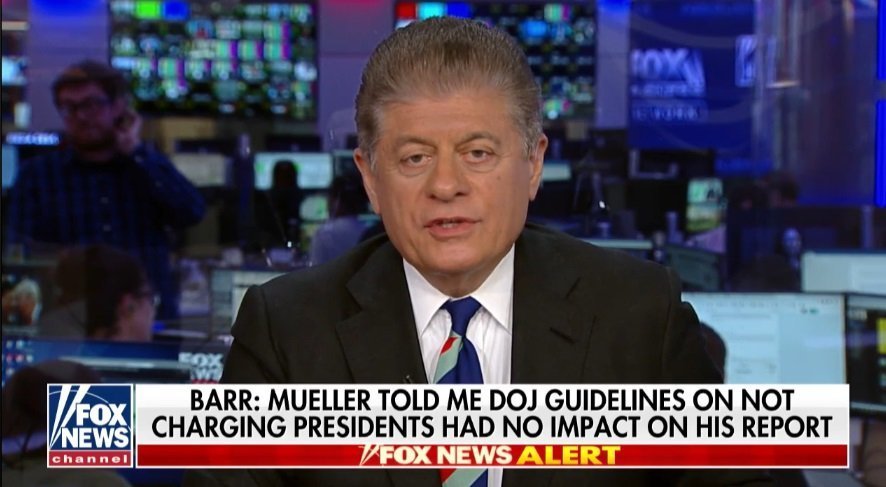 Special Counsel Robert Mueller made his first public statements since the release of his investigative report, and Fox News senior judicial analyst Judge Andrew Napolitano said it was “not good news” for President Trump.

In an interview today after Mueller’s remarks, Napolitano said he could not say exactly why Mueller decided to speak publicly, but the result would not be good for President Trump.

“He has ginned up all the Democrats to believe there must be a there there, and it was a parting shot at his soon-to-be former boss, Bill Barr, who basically whitewashed what Mueller said in the four-page summary he distributed back in March,” he said.

Napolitano told the Fox Business Network that the special counsel’s remarks were “even stronger than the language in his report” and that he had provided “remarkably similar” evidence to the kind cited against Presidents Nixon and Clinton.

Napolitano has criticized Trump’s handling of the Mueller probe, prompting Trump to claim Napolitano asked him for a job but was denied.

Fox News anchor Bret Baier said today that Mueller’s public statements on the Russia investigation were not “anywhere near as clear-cut” as President Trump’s and Attorney General William Barr’s pronouncements.

“This was not — as the president says time and time again — ‘no collusion, no obstruction.’ It was much more nuanced than that. He said specifically they couldn’t find evidence to move forward with the crime of collusion for the investigation of the Trump campaign,” Baier said. “It was not anywhere as clear-cut as Attorney General Bill Barr. In fact, it was almost exactly the opposite: not clear-cut.”

In his statement, Mueller announced that he would be closing the special counsel’s office, retiring from the DOJ, and would not testify further in regard to his Russia investigation.

He also said that the report, of which a redacted full version was released in April, was clear in its language that his office could not determine that the president did not commit a crime.

However, given the limitations of the special counsel’s office within the Department of Justice, it was “not an option” to indict Trump on an obstruction charge, Mueller said.

Napolitano said these rules, however, are up for interpretation.

According to the judicial analyst, the Office of Legal Counsel (OLC) ruled in October 2000 that a sitting president should not, “not cannot,” be indicted while still in office “because of material disruption to his constitutional duties.”

He said the guidelines are “advisory only, not mandatory”

Napolitano said there is “no way to reconcile” what Mueller said today with Attorney General Bill Barr’s previous assertion that the OLC guidelines were not the reason Mueller declined to recommend an obstruction charge.

Several Democrats even one Republican have come out in the months since Mueller’s report was released, advocating for impeachment.